The Church Of Pentecost Is The Leading Church In Pakistan 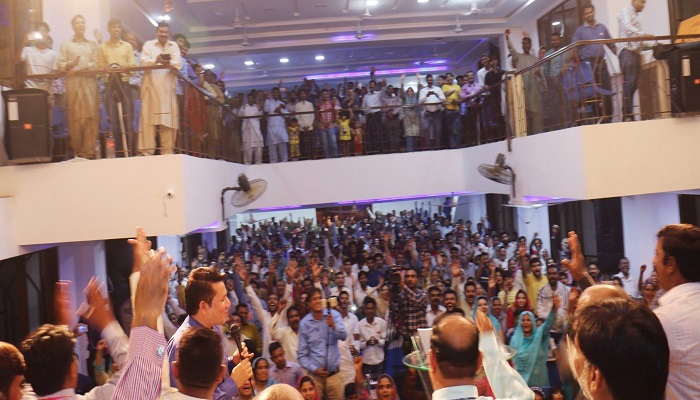 The Church Of Pentecost Is The Leading Church In Pakistan

The Church of Pentecost (COP) is said to be the leading church in the Muslim-dominant nation of Pakistan.
Currently, COP’s population in Pakistan is over 16,000 (all Pakistanis) fellowshipping in 47 assemblies, with 27 full-time pastors, 439 church leaders and 16 church buildings.

According to the National Head of the Church, Apostle Dr. Jamir Nasir, the COP has been in existence in Pakistan for 10 years and has registered its presence with vigorous evangelism about the Saviour of the world, the Lord Jesus Christ.

Apostle Dr Nasir told PENTECOST NEWS in an interview that The Church of Pentecost started in the South Asian country in 2008 with 250 people. He said within a year, the church was filled with people and there was no place to worship.

“The Lord to me to go to the streets, block it to hold service. People made fun of us, but within a couple of months the
street was full with about 500 people. We had to relocate, because we had challenges with parking.

“We moved to a public park and worshipped with about 500 members. But by the grace of God our gathering grew to about 3,000 people on the public park,” he stated.

He indicated that the Church is now building a huge church building, has a television studio where they produce some Christian programmes.

Apostle Dr. Jamir Nasir disclosed that the Church has been organising open crusade every month with average attendance of about 50,000 people. He said the Church intends to organise a mega crusade this year at the stadium to gather about 200,000 people for Christ.

The Church of Pentecost has its presence in major cities of Pakistan like Lahore which is the capital city of the province of Punjab. Lahore is the country’s second-most populous city after Karachi. It also has branches in Faisalabad, Sheikhupura, Kasur, Jamak and Rawad.

Apostle Dr. Jamir Nasir appealed to the leadership of the Church in Ghana, the Headquarters, to continue to pay apostolic visits to the Church in Pakistan in order to boost the morale of the members and to help train leaders.

He called on the Christian fraternity in Ghana and the world at large to pray for the security of Christians in Pakistan, especially known Christian leaders, who have been receiving constant death threats on their lives.

Pakistan, officially the Islamic Republic of Pakistan, is the fifth-most populous country in the world with a population exceeding 209,970,000 people. Islam is the state religion, and about 95-98% of Pakistanis are Muslim; only 2% belong to minority religious groups, with Christianity constituting about 1.5%. Pakistan has the second largest number of Muslims in the world after Indonesia.