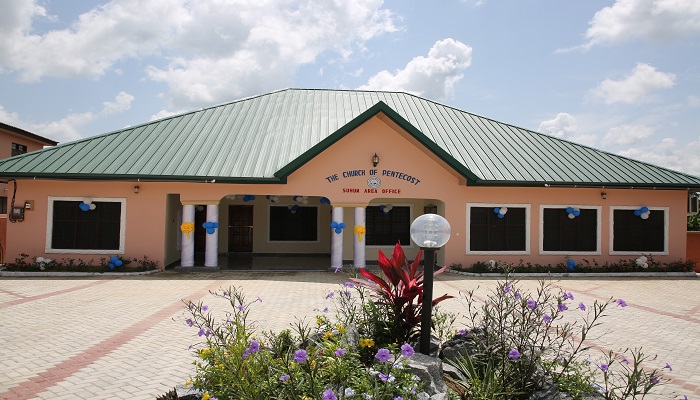 The Chairman of The Church of Pentecost, Apostle Eric Nyamekye, on Friday, November 2, 2018, joined hundreds of elated members of the Church in the Suhum Area to dedicate the new Area Office.

The Chairman commended members of the Church in the Area for their effort in constructing the state-of-the-art office worth GH¢397, 398.06.

Apostle Nyamekye observed that the Lord has been so gracious to The Church of Pentecost, a church which started with almost nothing and with no recognition. He however stated that the Church in recent times has seen massive infrastructural development, quality leadership at all levels, produced accomplished personalities in all spheres of life, and has also gained an enviable recognition both locally and internationally. This, he admitted, is the doing of the Lord, the owner of the Church.

He therefore entreated members of the Church to always appreciate God for how far He has brought them and also rely on Him for His grace and mercies for the future.

The new office, according to the Area Deacon, Elder Samuel Danso, began on March 21, 2017 during the time of Apostle Mike Etrue, the immediate-past Area Head, in an effort to secure a permanent office for the Area which was created in 1989.

He said the project continued earnestly under the current Area Head, Apostle Ekuban who took over the administration of the Area in September 2017.

Delivering the sermon on the topic, “Living Stones for a Spiritual House” based on 1 Peter 2:4-5 and Ephesians 2:19-22, Apostle Daniel Yeboah said Jesus Christ is the living stone because He died, resurrected and is forever alive.

He explained that anyone who believes in Christ also becomes a living stone that is used to build the spiritual house of God.

Giving the characteristics of the living stone, Apostle Nsaful pointed out that some of the stones are removed from the rocks while others are picked from the roadside but all together help in the building of the spiritual house of God.

He also stated that the stones are cut into required shapes which are pleasing to the builder. He explained that as one comes to Christ, the Holy Spirit and the Word of God work on them to become righteous so that they can be used to build the body of Christ.

The Effiduase Area Head indicated that stones for the spiritual house of God should be silt-free, thus every foreign material must be removed from them. He therefore urged Christians to allow themselves to be cleansed and transformed by the Word of God for the Lord’s use.

This, he said, will help them to transform society with their good Christian values since Ghana needs transformed Christians to develop the nation.

He also called on Christians to support government’s fight against illegal mining (galamsey) to safeguard the nation’s fast-depleting vegetation and river bodies, develop the right attitude towards work by reporting to work on time and doing what is expected of them, avoid engaging in bribery and corruption, saying, “We need people who are living stones to build this nation.”

The service was graced by the chiefs of Okorase, where the office is situated, led by Nana Amoako Kokora Boame IV, the Odikro. Also present was the wife of the General Secretary, Mrs. Rose Dansoa Kumi-Larbi, among others.