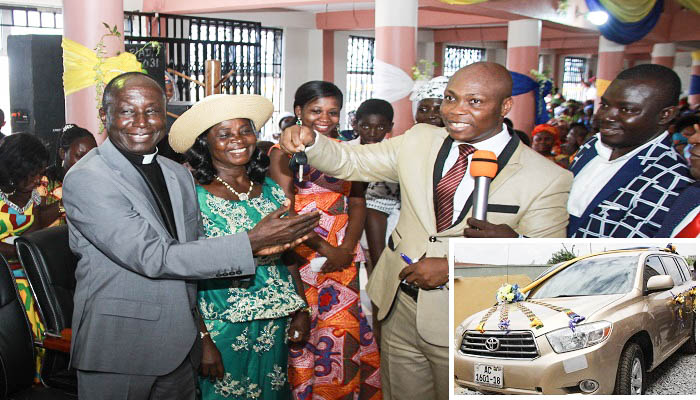 Some members of Ahwiaa District in the New Tafo Area of The Church of Pentecost have presented a Highlander Car worth GH₵80,000 to Pastor Benjamin Kwame and Mrs Gloria Love Duodu.

The vehicle with registration number AC 1601-18 was presented to the couple during a retirement service held in their honour at Ahwiaa Central Assembly on July 29, 2018. Pastor and Mrs. Duodu served in the Ahwiaa District for 4 years before gracefully bringing their 21-year ministerial service to an end.

The service was officiated by the General Secretary of The Church of Pentecost, Apostle Alexander Nana Yaw Kumi-Larbi. He exhorted the congregants with a message titled, “What Have You Done?: Serve God’s Purpose In Your Generation With Integrity.”

Reading from 1 Samuel 17:22-30; Psalm 78:70-72; Acts 13:36 and Hebrews 1:9, he asserted that Christians in the contemporary world are faced with a lot of challenges such as false prophecies, moral decadence and worldliness, environmental and sanitation issues, and corruption. He, however, noted that, amidst all the above-stationed challenges, God would promote and anoint with the oil of gladness those who serve Him with integrity.

He admonished leaders to serve God with integrity just as David did. He remarked that people who serve with integrity are incorruptible. “Integrity is what one does when no one is watching,” he explained.

Apostle Kumi-Larbi further stated that God has called every Christian for a purpose. “Nobody is a mistake on earth irrespective of the circumstances in which they find themes,” he said. He mentioned some Bible figures whom God used to accomplish different purposes on earth. He said that Moses was assigned to deliver Israel from slavery in Egypt (Exodus 3:10), Joshua led them to cross the Jordan (Joshua 1:1-2), while Samson delivered them out of the hand of the Philistines (Judges 13:3-5). He added that John the Baptist was also assigned to testify about Jesus Christ while Solomon was tasked to build the Temple (2 Samuel 7).

Concluding his message, Apostle Kumi-Larbi urged Christians to serve the purpose of God in the contemporary generation by fighting against false prophecies, moral decadence and worldliness, environmental and sanitation issues, and corruption that have become herculean challenges in the society. Referring to Genesis 2:15, he noted that God did not call Christians to destroy the nation, rather the believers are created in Christ for good works (Ephesians 2:10).
Present at the retirement service were Apostle Robert Kwabena Andoh (Wa Area Head), ministers and wives within and outside the New Tafo Area, and some retired ministers of the Church.