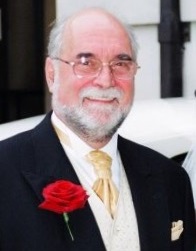 David Lawrence Mills hails from Isleworth, Middlesex, UK. He was born on April 25, 1938 to Sydney Joseph Mills of Portsmouth and Grace Jean Turner of Brighton.

David attended Trafalgar Primary School, Twickenham, Middlesex until about 1949. Between 1949 and 1954 he attended Latymer Upper School, a public/independent school in Hammersmith, London where he received 8 ‘O’ Level qualifications, having gained a scholarship to study there. In 1956, he completed study at Spring Grove Polytechnic in London and achieved ‘A’ Levels in Maths, Chemistry and Biology.

In 1957, David achieved a Distinction in National Certificate in Chemistry at Acton Technical College, North London and was admitted as a student-member of the Royal Institute of Chemists. At one point, he was an apprentice Chartered Surveyor in London because he wanted to travel. In 1959, David was awarded a Higher National Certificate in Chemistry at Brunel College of Technology in London whilst working at Firestone tyres.

Around 1961, Pastor David Mills went to Elim Bible College in Clapham, London before the college later moved to Capel in Surrey. He was later appointed Head Student of the college. In 1963, he passed all his exams with flying colours and, therefore, qualified with a Diploma with Distinction.

Conversion and Call into the Full-Time Ministry
He grew up in the Ealing branch of the Elim Pentecostal Church where his mother was fellowshipping. At the age of 16, he became a member of that church and was baptised in 1953 by Pastor Tom Walker. After graduating from the Bible School, he was ordained at the Kensington Temple Elim Church in Notting Hill, London. He pastored at Harrogate Elim Church. On September 28, 1966, he and his wife, Margaret, were sent as missionaries to Ghana by the Elim Pentecostal Church, UK, to supervise and coordinate its new ministry in the country. They were based at Koforidua.

In 1971, after the missionary work he was involved in had been saddled with uncertainties and difficulties, David Mills, by divine design and heavenly orchestration, found himself under the invigoratingly accommodative umbrella of The Church of Pentecost. He then became the foundation on which was built the long-standing affiliation between the Elim Pentecostal Church, UK, and The Church of Pentecost, which has existed until today.

In 1972, Pastor Mills was appointed the first Principal of the Pentecost Bible Centre at Asokwa in Kumasi with an initial enrolment of five pastor-students. It was based at the basement of the Sophia McKeown Temple. After two years, the Bible Centre was closed down. He was subsequently posted to Kwadaso as the District Pastor from 1974 to 1982, overseeing all the twenty-seven local congregations spread out in rural communities in the District.

Pastor Mills later described the decision to appoint him a District Pastor as divine. He paid frequent visits to the congregations in the rural areas, organised rallies, crusades, teaching sessions, the traditional Friday morning prayers in addition to person-to-person counselling sessions.

As a good missionary, he made several cultural adjustments and was, therefore, able to eat many Ghanaian meals. His favourite dishes included kenkey, fufu, aprapransa and ampesi. During the disturbing and debilitating famine in 1983, he gladly ate the most available konkonte meal. Similarly, although their residence (manse) was located next to a noisy local market and a public toilet, Pastor Mills and his family were not perturbed in their mission to shepherd the flock.

While in Kumasi, David realised that his residence was next to that of the Otumfuo Opoku Ware II before he was enstooled the Asantehene. They became very good friends. Accordingly, after his ascendancy to the royal throne, Pastor Mills and his family could easily visit the palace at any time. No wonder, Pastor David Mills adopted the Asante name Kwadwo Asante while his wife also adopted the name Afia Pokuwaa, which had roots from the royal family of the powerful Asante Kingdom.

In 1982, when the Bible School concept was revived, Pastor David Mills was transferred to Accra to resume work as Principal of the Pentecost Bible Centre. It was initially based at Asoredanhu near Dansoman, and later moved to Madina in 1984. The major course he taught at the Bible Centre was Paul’s first epistle to the Corinthians. He is mainly remembered by his students by the way he pronounced Paul’s name. He was usually heard saying “Apostle Puul”. Pastor Mills finally left for the UK in 1984 after spending a total of eighteen years in Ghana.

Meanwhile, during the General Council Meetings of the Church held in Kumasi in 1972, a decision was taken for the children in the Church to be well organised for effective teaching of Scripture. Among those chosen to have oversight responsibility of the “Sunday School” was Mrs. Margaret Mills, who had earlier on established the “Sunday School” at the Asokwa mission house. She was subsequently appointed Deputy General Leader of the Children’s Ministry with Apostle Christian Apau-Asante as the General Leader. She produced the first Children’s ministry syllabus in 1975. She is credited with the introduction of residential children’s camp meetings in the Church.

Marriage and Family Life
Pastor David Lawrence Mills met Margaret Scott (daughter of Frank and Alice Scott) during the time they were both at Elim Bible College and they married in 1963. The marriage was blessed with four daughters. Because all the children were born in Ghana, he gave them Ghanaian names in addition to their English names: Ruth Jean Goodison (Yaa Asantewaa), Judith Annette Astwood (Abenaa Korkor), Erica Joy Lugg (Akosua Mansa) and Margaret Grace Nartey (Abena Anane). Pastor Mills and his wife adopted Mark Yeboah Mills (Kofi Atta) when he was just 6 days old. Mark had been biologically born to Elder Robert Nketiah and his wife, Agnes Yeboah. Unfortunately, however, Agnes and Mark’s twin sibling died leaving Mark.

Significant Contributions by Pastor David Lawrence Mills to the Growth of The Church of Pentecost
• As an excellent Bible teacher and great mentor, he helped to develop the leadership skills of many of the Church’s leaders such as Apostles Daniel Obeng Attuah, Johnson Agyeman Baduh, Alfred Koduah, Prophet B. A. Adobah, and Pastor Kwabena Adjei Danso, who were all in Kwadaso District at the time Pastor Mills was in charge of that district. The many Pastors who studied under his feet at the Bible Centre are all in various leadership positions of the Church.

• He was the first Principal of the Pentecost Bible Centre, which has over the years metamorphosed into the Pentecost University College and Pentecost Theological Seminary.

• He initiated the home cell concept in the Church when he was serving as District Pastor at Kwadaso. He efficiently pioneered and used the concept to plant many churches in the District and also used it to train many leaders.

• As a very adaptive missionary, he lived as a white man among black people and united them as one family with the love of God.

Death
Pastor David Lawrence Mills died on October 22, 2007 at the age of 69. In line with the fond memories he had for Ghana, just before he died, he asked two Ghanaian songs to be sung: Ewurade, mema me kra so mekyerε wo…, and Yε Hene reba oo, ɔnam reba oo…