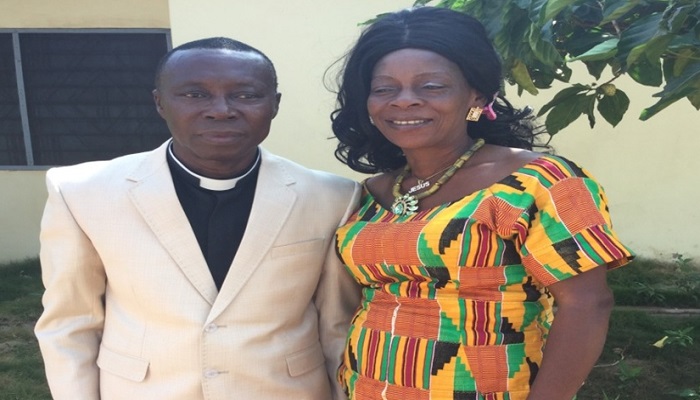 Daniel Freeman Kwadjo Lamptey, also known as Brother Daniel in family circles, was born at Asuorkor, a farming village in Togoland, on October 5, 1953, to Abraham Lamptey and Victoria Ekohouneh, both of blessed memory. He is the third child of his mother.

He started elementary education in Ghana at Brewaniase L/A Primary and Middle Schools from 1960 to 1970 where he obtained the Middle School Leaving Certificate. He returned to Togoland to assist his father on his cocoa farm for one year. In 1972 he gained admission to the then Volta Secretarial Academy at Hohoe to pursue a 4-year Commercial Education Course.

He pursued courses in Accounting, Secretarial duties, Commerce and Finance. Daniel started working at the St. Francis Teacher Training College at Hohoe as an ungraded typist to enable him pursue his academic goals.

Daniel worked at St. Francis Training College at Hohoe for five years (1976–1980) sequel to which he was promoted to the office of an Executive Officer and transferred to head the Administration of Volta School for the Deaf for six years (1981-1986). He then left the Education Service and was employed by the Agricultural Development Bank Hohoe, as Branch Secretary for five years (1987–1991). He also worked as Secretary to the Electoral Commission in the South Dayi Constituency during the era of the “Union Government” initiated by the late General Ignatius Kutu Acheampong (former Head of State of Ghana).

He came to Christ through a Morris Cerullo crusade in 1979, accepted Him as his Lord and Saviour and was baptized by immersion by Evangelist Morris Cerullo in 1980. He joined the Scripture Union and got the Holy Spirit baptism in 1980. He was appointed Secretary to Town and Nurses Christian Fellowships and a Committee Member of Scripture Union responsible for Junior and Senior Camps in Schools and Colleges.

Daniel continued to work with the Scripture Union until one day, the then Pastor Daniel Obeng-Attuah (now Apostle retired) invited him to one of their Officers Retreats which was officiated by Prophet M. K. Yeboah (late Chairman) in 1985. After that retreat, Prophet M. K. Yeboah (then Regional Head) gave him his handout for the retreat and advised him to come and assist The Church of Pentecost because the District was in need of workers. Brother Daniel then resigned accordingly from the Scripture Union duties. When he joined The Church of Pentecost, he helped in opening six (6) new assemblies (Lolobi-Ashambi, Golokwati, Tafi-Mador, Dafornu, Kledzo and Santrokofi Benua) and also helped in reviving five (5) collapsing assemblies (Alavanyo, Likpe Bakwa, Wegbe, Ve-Kolenu and Akpafu Mempeasem).

He also served as District Witness and Children Movements Leader. During his tenure as the District Witness Leader, he led the Movement to win the first and second positions of the National Quiz Competitions for the District. He was ordained an Elder by the then Prophet J. K. Ennum on June 30, 1991.

Daniel married Elizabeth Queen Lamptey at Krobo Odumase on January 5, 1980, and they are blessed with seven (7) children, five males and two females.

He was recommended for full-time Ministry by Pastor Daniel Obeng-Attuah (now a Retired Apostle) in 1988, but due to ill-health, his recommendation was deferred. He was again recommended for ministry by the then Pastor J. W. D. Cudjoe (of blessed memory) in 1991 and had his ministerial training at the Pentecost Bible School, Madina in January 1992.

Pastor Lamptey has authored two books on “Contemporary Exposition on Eschatology” and its Twi version as well as “A Journey with the Holy Spirit.”

Together, Pastor and Mrs. Lamptey formed a formidable team in ministry. They have fared well in their dealings with the Lord, and He, the great rewarder for good works, will reward them according to His riches through His Son, Jesus Christ.
A retirement service would be held in honour of Pastor Daniel Freeman and Mrs. Elizabeth Lamptey on Sunday, July 29, 2018, at the Prampram Central Assembly in the Tema Area of The Church of Pentecost.