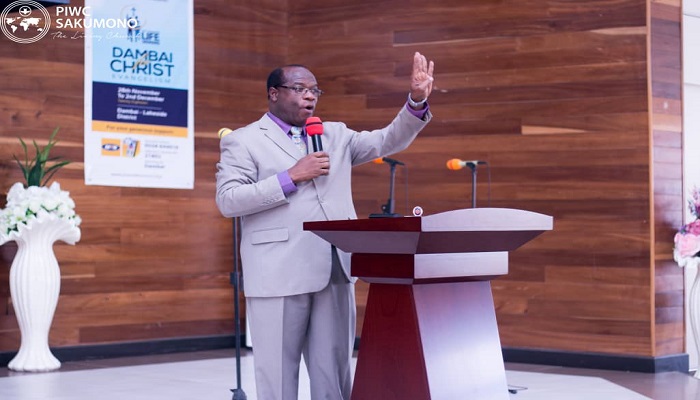 The Teshie-Nungua Area Head of The Church of Pentecost, Apostle Dr Alfred Koduah, has asked Christians to obey the Almighty God in order for them to receive their blessings.

According to him, even though the Lord has blessed Christians tremendously, failure to listen and to obey the word of the Lord has deprived some Christians of their blessings.

“Until you learn to obey one hundred percent like Abraham, your blessings will be withheld,” he said.

Apostle Dr Koduah said this in a sermon on Sunday, November 18, 2018, when he fellowshipped with the Pentecost International Worship Centre (PIWC), Sakumono on the topic, “The Lord has blessed you but there is a young man following you,” taken from the story of Abraham and his nephew Lot in the book of Genesis.

Explaining what he meant by “a young man is following you,” Apostle Dr Koduah said it could be a physical man or anything that deprives one from receiving their blessings from God, saying, “It could be anger, lies, pilfering, negative attitude, secret lover, among others.”

Using Abraham as a case study from Genesis 12:1-4; 12:7; 13:8; 13:17; 17:1 and 17:23 among others, Apostle Dr Koduah stated that God instructed Abraham to leave his country, his people, his father’s household and go to a land He God will show him. However, he said, Abraham decided to go along with his nephew Lot who was part of his people, thereby not fully obeying the instructions of God.

According to him, when Abraham totally obeyed God and parted ways with Lot, God released His manifold blessings on Abraham by turning him into a great nation.

Following this experience, Abraham fully obeyed God when He asked him to circumcise his household, sending Hagar and Ismael away and sacrificing his son Isaac.

“In God’s obedience scheme, 75% is not good enough, Abraham totally obeyed God 100% and his blessings overflowed,” he said.

Also reading from 1 Samuel 9:1-27, Apostle Dr Koduah said so long as the servant of Saul was with him when he was looking for his father’s missing donkeys, the Prophet Samuel did not tell him the message God had for him until that “young man following him left.”

Using Ephesians 1:3, Apostle Dr Koduah also explained that although the people of Ephesus were idol worshippers, Paul assured them that they are blessed with every spiritual blessing since they have believed in Christ.

He explained that when one becomes born again, God shows His love towards that person to a thousand generations, adding, “God has blessed every Christian in the heavenly realms and any ancestral curse does not affect those who have Christ.”