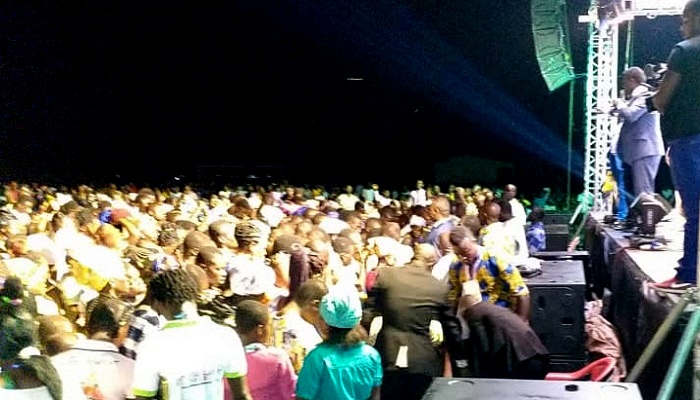 A total of 509 souls surrendered their lives to Christ during a 5-day crusade held at Kpassa by the Nkwanta Area of The Church of Pentecost from October 22 to 26, 2018 at Kpassa JHS B Park.

The Crusade, which was jointly organised with Evangelism Directorate, was under the theme “Jesus Is The Answer” (John 14:6).

Preceding the crusade was a well-attended “Jesus March” (floats) organized through the principal streets of Kpassa on Sunday, October 21, 2018, to create awareness for the event. This was followed with a Film Show on the Gospel of Jesus Christ at different locations in Kpassa and nearby communities by the Evangelism Ministry Cinema Van. The activities of the Cinema Van won a total of 95 souls, comprising 53 adults and 42 children, to Christ.

During the crusade, a total of 412 souls yielded to the Lordship of Christ. These souls were made up of 275 adults and 137 children.

In all, a total of 509 were won at the end of the crusade, out of which 267 of them were baptized in water. In addition, 67 members also received Holy Ghost baptism to the glory of the Lord.

The power of God was also mightily felt during the sessions as many miraculous incidents were recorded; most notable amongst them was that of Brother Jayoon Michael, a member of Kpassa English Assembly of The Church of Pentecost and a second-year student of Kpassa Senior High Technical School, who received instant healing from blindness which had compelled him to drop out of school for months.

The event had massive turn out with the Friday Evening service alone recording a total attendance of 16, 486 people.

As part of activities for the crusade, a free medical screening was held for 341 residents of Kpassa. This was spearheaded by the Kpassa Pentecost Hospital. The 341 persons who participated in the screening exercise were examined for blood pressure, typhoid, and malaria, Hepatitis B, among others.