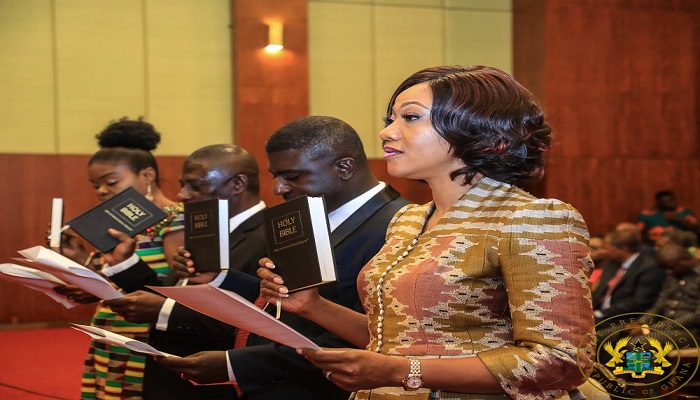 Former Executive Director of the Institute of Economic Affairs, IEA, Jean Mensa, has been sworn into office by President Akufo-Addo as the new Chairperson of the Electoral Commission.

The swearing in comes after the Supreme Court dismissed an injunction suit by a Ghanaian citizen, Fafali Nyonatorto, who sought to stop the President from continuing with the process of appointing a new Electoral Commission Chair.

This was to enable the Court to hear her substantive case in which she is challenging Charlotte Osei’s removal.

But according to the seven-member panel of Supreme Court judges, the constitution in Article 2 (2) makes available remedies for a reinstatement if the court finds the removal of Charlotte Osei unconstitutional.

The office of the President on Monday, July 23, 2018, announced the nomination of four (4) top officials for the Electoral Commission (EC).

The nominations became necessary after the former EC boss, Charlotte Osei and two of her deputies, Ahmadu Sulley and Georgina Opoku-Amankwah were dismissed, and one Pauline Dadzawa also retired as a member of the commission.

President Nana Akufo-Addo has made it clear that the removal of the former Chairperson of the Electoral Commission, Charlotte Osei and her two deputies from office was done without malice.

According to him, he only discharged the constitutional mandate as expected of him.

“Respect for due process and constitutional propriety led to the discharge of the heavy duty of giving effect to the recommendations of the constitutional body that investigated the petitions against the former Chairperson of the Electoral Commission and her two deputies. I acted as directed by the constitution without any malice or premeditation,” he said on Saturday.

The President on June 28, 2018, dismissed the Chairperson of the Charlotte Osei and her two deputies – Amadu Sulley and Georgina Opoku Amankwa – from office upon the recommendation of a committee set up by the Chief Justice, Justice Sophia Akufo. They were dismissed for procurement breaches and in some cases financial malfeasance.

The committee was set up by the Chief Justice Akuffo, under Article 146(4) of the Constitution, to investigate separate complaints brought by some Ghanaian citizens.

The NDC has maintained that her removal is politically motivated.