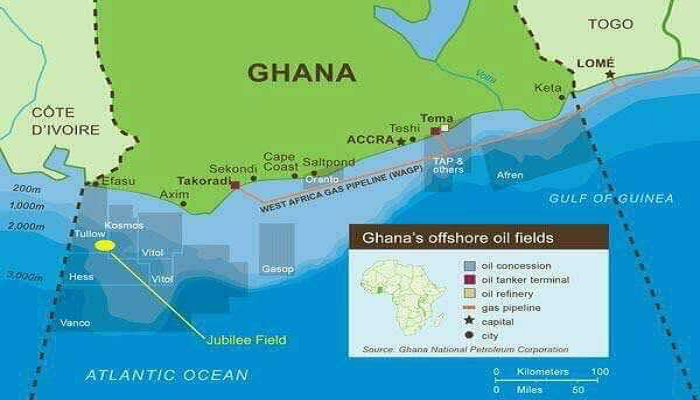 A fresh maritime border dispute is brewing between Ghana and Togo over offshore oil exploration activities, the Petroleum Commission (PC) has confirmed.

Togo had, between December 2017 and May 2018, stopped two seismic vessels from Ghana from undertaking seismic activities to acquire seismic data in the deep sea in the territory that approaches Togo.

Following the resolution of the impasse between Ghana and Cote d’Ivoire over maritime border demarcations, Togo has been claiming ownership of a maritime boundary that approaches that country.

This was made known by the acting Director of the Resource Management Unit of the PC, Mr Francis Ackah, in Accra on the sidelines of a training programme for journalists from selected media houses from the Western and the Greater Accra regions.

What is being done?

In September last year, Ghana secured a ruling in its favour following a protracted legal battle with Cote d’Ivoire over a maritime boundary.

Mr Ackah hinted that Ghana was currently handling a border dispute with Togo, while another with Burkina Faso was also in the offing.

“Togo says that it does not recognise our borders and so we need to meet the authorities of that country and see how we can resolve the issue. Already, the Ministry of Energy has put in place a committee to handle the issue.

“In December 2017, a seismic vessel from Ghana was on the sea when the Togo Navy stopped it from working. While we were looking at that issue, another seismic vessel was stopped by the Togolese authorities this month,” he said.

He said so far arrangements were in place for the two parties to meet to resolve the issue amicably.

Experts such as the former Chairman of the Ghana-Togo Border Demarcation Commission, Mr Sam Okudzeto, had warned earlier of such disputes and suggested that Ghana look at how it would agree with Burkina Faso and Togo on its territories.

That, he said, was necessary to avert future legal disputes which would have to be resolved at the international tribunal.

On September 23, 2017, The Special Chamber of the International Tribunal of the Law of the Sea ruled that there had not been any violation on the part of Ghana in respect of Cote d’Ivoire’s maritime boundary.

The three-year dispute between the two countries commenced in 2014 when Ghana took the case to ITLOS to dispel claims it had encroached on Cote d’Ivoire’s marine border as part of oil exploration activities at Cape Three Points, off the shores of the Western Region.

Ghana’s defence, before the oral hearings were concluded in February 2017, held that Cote d’Ivoire had no right to demand ownership of the disputed area after it had already acknowledged that Ghana owned the space without any qualms prior to the discovery of oil.

Cote d’Ivoire had petitioned the United Nations in 2010, three years after Ghana discovered oil in commercial quantities, asking for a completion of the demarcation of its maritime boundary with Ghana.

The claims by Cote d’Ivoire led to Ghana setting up the Ghana Boundary Commission, which was tasked with the responsibility for finding a lasting solution to the problem through negotiation.

Unfortunately, both countries failed to arrive at a conclusion, for which reason Ghana subsequently dragged Cote d’Ivoire to ITLOS.