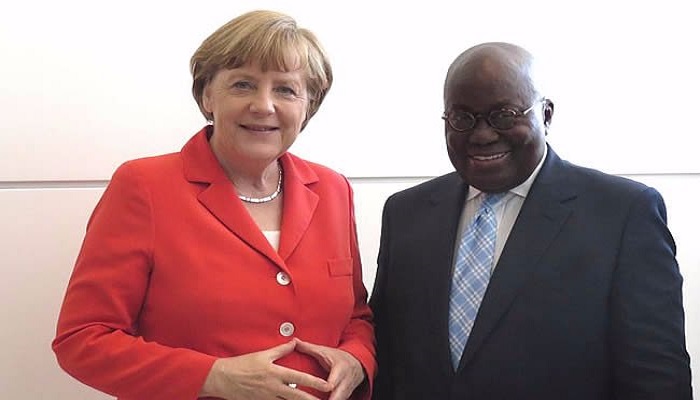 Dr Angela Merkel, the Chancellor of the Federal Republic of Germany, has arrived in Ghana today [Thursday, August 30], for a day’s visit, which aimed at strengthening bilateral relations and promoting trade opportunities.

The Chancellor was accompanied by a high-ranking German business delegation to explore business and investment opportunities between the two countries.

As part of the visit, German Industry and Commerce in Ghana (AHK Ghana) will host a business dialogue to facilitate an exchange on the prevailing business environment in Ghana, a statement posted by the delegation of AHK Ghana and obtained by the Ghana News Agency in Accra on Wednesday indicated.

Ghana has had a long historical relationship with Germany ever since official contacts were made after Ghana’s Independence in 1957.

The good relations between Ghana and Germany has led to beneficial ties in the areas of trade and investment, educational exchange programmes and socio-cultural activities.

The two nations have maintained close and intensive political relations.

Ghana is a key partner for Germany in West Africa, as illustrated by her inclusion in the G20 initiative Compact with Africa under the German G20 Presidency in 2017.

The state visit of Federal President Frank-Walter Steinmeier to Ghana in December 2017 was high point in the German-Ghana relations.

Since taking office, President Nana Addo Dankwa Akufo-Addo had met twice with Dr Merkel; June 2017 on the occasion of the G20 Africa Conference in Berlin and February 2018 on an official visit to Germany to attend economic conferences in Dortmund and Berlin.

Ghana is one of Germany’s most important trading partners in sub-Saharan Africa and a wide range of German institutions and intermediary organisations are active in Ghana.

The country’s bilateral trade with Germany amounted to 481 million euros in 2017.

Germany’s annual trade with Africa is estimated at 60 billion dollars, however, Germany has lagged behind other western countries that have done more in terms of trade opportunities in Africa.

Out of more than 10 billion dollars in German investments on the continent each year, 90 per cent is with just three countries – South Africa, Nigeria and Algeria.

Notwithstanding, Ghana has benefited from a number of investments and economic trade activities from Germany.

The country has attracted investment from Germany in the areas of construction, agriculture (Shea butter and rice farming project), manufacturing and services and benefited in some form of technical, cultural, and military assistance from Germany.

The Government  of  Ghana  continues  to  receive budgetary  support  and  further  receives  political  assistance  from  Germany  in  strengthening democratic governance and various institutions of state.

Germany has also benefited from Ghana through Ghana-Germany relations. These gains are vastly in the areas of trade and economic activities including export of cocoa beans and non-traditional export commodities.

Germany further benefits from the repatriation of profit from its investments in Ghana, especially through tax exemption granted to German companies commencing operations in Ghana.

Ghana’s democracy has been partly supported by German non-governmental organisations such as  Konrad  Adenauer  Stiftung,  Friedrich-Ebert-Stiftung,  Kreditanstalt  fur Wiederaufbau  and  German  International  Cooperation, that have been promoting development in areas of agriculture, private sector development, capacity  building  and good governance.

In 2012, trade exchange between the two countries grew by 56% with a chunk of the trade exchange going in favour of Germany. This disparity creates imbalance between Ghanaian and German imports.

It is hoped that the German Chancellor’s visit would bolster trade between the two countries and create more partnerships between the Ghanaian business community and their German counterparts.