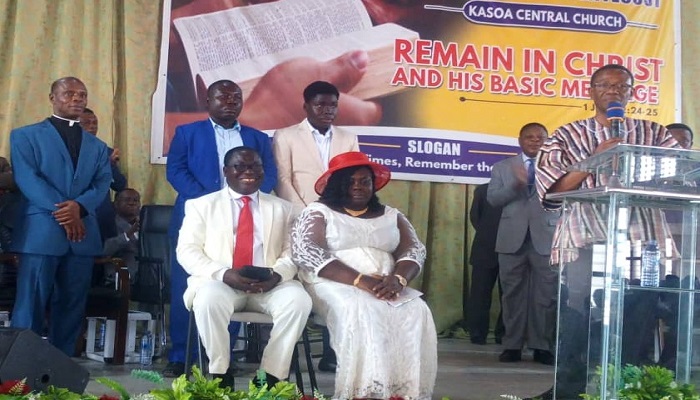 An appreciation service has been held in honour of Elder Foster Amoani, the immediate-past Area Deacon of Kasoa Area of The Church of Pentecost, on Wednesday, September 12, 2018.

The service which was held at the Kasoa Central Assembly auditorium was officiated by the General Secretary of the Church, Apostle Alexander Nana Yaw Kumi-Larbi. Among the dignitaries that graced the occasion were: Apostle Samuel Nana Yaw Agyei (Centre Manager, Pentecost Convention Centre), Apostle Samuel Antwi (the outgoing Kasoa Area Head), Elder Professor Stephen Owusu Kwankye (Finance Board Chairman of the Church), among others.

The General Secretary lauded Elder Amoani, describing him as a faithful leader who has served meritoriously for 20 years as an Area Deacon and 18 years as a member of the Finance Board.

Apostle Kumi-Larbi indicated that the office of the Area Deacon is a high calling and needs people who are trustworthy. “We need to commend such a loyal and faithful leader for the good work done,” he said.

Elder Amoani served as an Area Deacon in the erstwhile Accra West Area for 10 years, and Kasoa Area also for another 10 years.

The Pastorate in the Kasoa Area also described Elder Foster Amoani as a man of God anointed to manage the financial resources of the Church. “He exudes confidence, trust and elation in spite of the setbacks in the discharge of his duties,” it said.

In a sermon, Apostle Nana Yaw Agyei, Centre Manager of PCC, admonished Christians to serve God with a sincere heart. Speaking on the topic: “Worshipping upon Revelation” with Bible text from John 12:1-9, he asked Christians to worship God with all their possessions, including their wealth, time, abilities and capabilities.

Apostle Nana Yaw Agyei posited that it is prudent to acknowledge the good work of a person while he/she is alive. “When someone does something good, it is important to acknowledge it before he/she dies,” he noted.

The PCC Centre Manager admonished Christians to beware of the voice of Judas when worshipping God. He explained that Judas’ voice could distract a person from worshipping God sincerely. He noted that it is good to share thoughts with people who are positive-minded.

In response, Elder Foster Amoani, who is currently the Registrar of the Pentecost University College, thanked God for seeing him through the 20-year period.