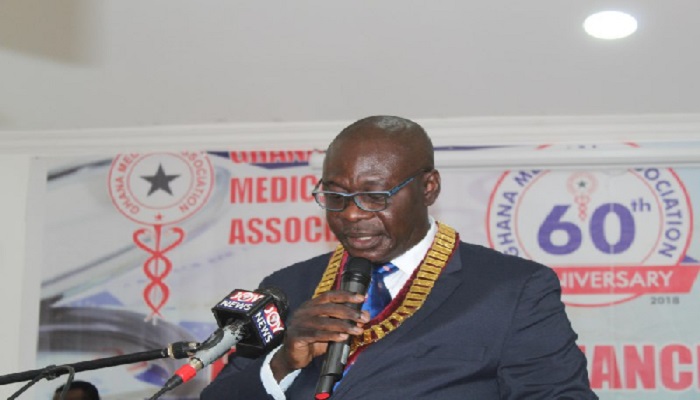 The Ghana Medical Association has threatened to withdraw outpatient services at public facilities from Monday, August 6, 2018 if the government fails to honour outstanding emoluments due doctors within a one-week window.

The Association says its members in the public sector would then withdraw “all emergency services” from August 20 if their demands are unheeded.

They have further threatened to withdraw all services rendered by medical doctors in the public sector from Monday, August 27 if the issues were not resolved by the time.

Addressing a news conference at Jirapa in the Upper West Region at their 4th National Executive Council Meeting, president of the Association, Dr Frank Ankobea, said “the GMA will continue to give updates to its members and the general public on any development”.

Dr Ankobea said the GMA had earlier in November 2017 given government up to the end of April 2018 to honour its obligation towards members of the Association as occasioned by a compulsory arbitration award by the National Labour Commission.

The outstanding debts owed by government towards members of the Association have been occasioned by “doctors having suffered reduced pensions following migration onto the Single Spine Pay Policy, with the conversion difference unpaid since December 2011,” Dr Ankobea said.

Dr Ankobea said: “It is worth noting that government (through the Ministry of Health) did not engage GMA until a week to the expiration of the deadline, and only requested that the GMA grant a window period up to the end of May to get the matters resolved”.

Dr Ankobea said the GMA even extended the grace period government requested to the end of June 2018.

He said it was “disheartening that despite all these extensions, government has been lackadaisical in bringing closure to the outstanding issues”.

Dr Ankobea’s address was contained in a communiqué issued by the Association as it ended events of its 60th anniversary celebrations.