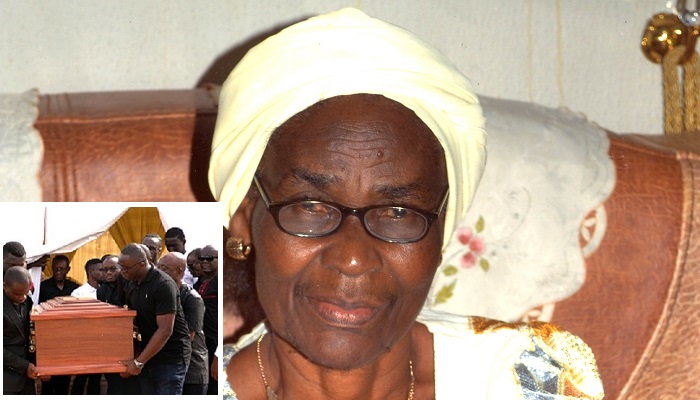 The mortal remains of Deaconess Christiana Abena Asantewaa Kissi, wife of the former Finance Board Chairman of The Church of Pentecost, Elder Emmanuel Owusu Kissi, was laid to rest at Suhum in the Eastern Region on Saturday, September 29, 2018.

The memorial and burial service which was officiated by the Chairman of the Church, Apostle Eric Nyamekye, was attended by several ministers of the Church and sympathizers from all walks of life. Notable personalities who attended the programme included the immediate-past Chairman, Apostle Prof. Opoku Onyinah, the Deputy Inspector General of Police, Commissioner of Police (COP) Mr. Oppong Boanuh, the chiefs in Suhum and its surrounding communities, among others.

The late Mama Christie, as she was affectionately called, was the mother of Mrs. Rose Dansoa Kumi-Larbi, wife of the General Secretary of The Church of Pentecost, Apostle Alexander Nana Yaw Kumi-Larbi), Pastor Samuel Kissi Agyekum of New Achimota District, and Mrs. Joyce Adupong (wife of Pastor Charles Teddy Adupong of COP-UK), and others.

Deaconess Christiana Kissi contributed immensely to the Kingdom business, partnering her husband in preaching the Word of God in villages and towns in Suhum and its environs. Her house became the second Mission House due to her hospitality.

He, on behalf of the Chairman, Apostle Eric Nyamekye, the Executive Council and the General Council, extended their condolences to the bereaved family.

Preaching the sermon at event, a former General Secretary of the Church, Apostle Rigwell Ato Addison, said that the late deaconess devoted her life to serving the purpose of God in her productive years.

Quoting from Revelation 14:3; Philippians 3:11; Matthew 15:23, among other texts, he said that the righteous do not only rest from their labour after their death, but also enjoy eternal joy. He noted that there is a lasting rest after death for a well-lived life, and entreated all and sundry to remain in Christ and live a righteous life.

According to him, dying in the Lord comes with so many benefits. He stated that believers who die in the Lord will receive a glorious body (transformed body) in the likeness of God, will receive an imperishable reward and also be heirs with Christ in the Kingdom of God.

Deaconess Christiana Asantewaa Kissi, 80, was called to glory on August 19, 2018 at the Suhum Government Hospital. She is survived by seven children, 21 grandchildren and seven great grandchildren.