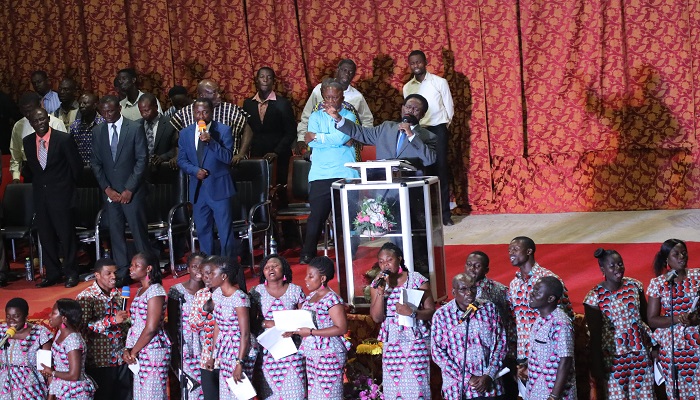 The Chairman of The Church of Pentecost, Apostle Professor Opoku Onyinah, has paid a 3-day working visit to the Koforidua Area from March 2 to 4, 2018.

The Chairman was accompanied by his wife, Mrs. Grace Opoku Onyinah, and Pastor Ebenezer Amartey Ahuakese (Resident Minister, Evangel Worship Centre in the Teshie-Nungua Area) and his wife, Mrs. Rebecca Ahuakese. They were received on arrival by the Koforidua Area Head and Executive Council Member of the Church, Apostle Eric Nyamekye, and his wife, Mrs. Mary Nyamekye.

The visit also served as a homecoming trip for the Chairman who served as Regional Head of the then Eastern Region ‘A’ from 1988 to 1991. The visit brought back fond and nostalgic memories since it was the Chairman’s first official visit to the Area after his reassignment about 27 years ago.

On Day 2 of his visit, the Chairman dedicated the ultra-modern church auditorium for the Central Assembly of the Koforidua District, which he named “The Central Tabernacle” during his tenure as the Regional Head of the Area about three decades ago. He also dedicated the newly-constructed 30-unit classroom block of the Koforidua Pentecost Preparatory School (PPS-Koforidua) on the same day.

Apostle Professor Opoku Onyinah rounded off his visit to the Area by joining the Pentecost International Worship Centre (PIWC) – Koforidua for the Sunday Communion Service on March 4, 2018.

The Chairman and his entourage have since returned to Accra.