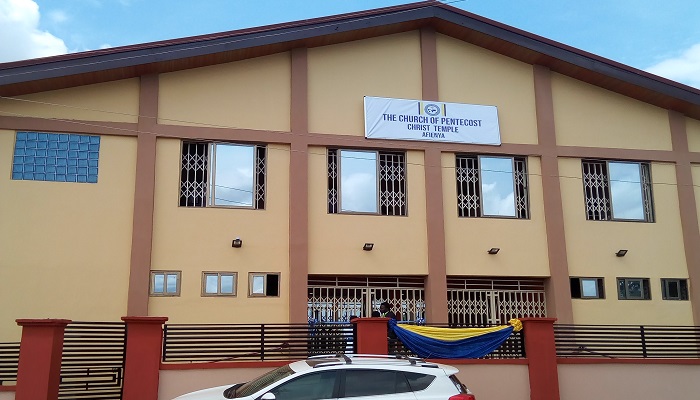 The Central Church building of the Afienya District in the Ashaiman Area of The Church of Pentecost was dedicated on Sunday, September 16, 2018, to the glory of God.

The 1000-seater auditorium, which is valued at GHC. 802,409.00, has offices for the District Minister and Clerk as well as Children’s Ministry auditorium with an elevated platform, washrooms and a spacious car park, among other facilities.
Formerly Afienya Assembly, the Afienya Central Church building, now known as “Christ Temple”, was opened in 1960 under the Tema District during the tenure of Pastor Moses Ladejo (now Apostle Moses Ladejo retired).

The then Tema Area Head, Prophet J E Ameyaw (now retired) cut the sod for the commencement of a permanent building project for the church on December 15, 2018, during the tenure of Pastor Henry Kwabena Sarfo as District Minister.
Pastors Kofi Antwi Boasiako and Alexander Nana Yaw Kumi-Larbi (now Apostle Kumi-Larbi and General Secretary, COP) together with the Area Estate Committee Chairman supervised the project.

During the tenure of Apostle Noble Atsu (now retired) as Tema Area Head, the foundation stone of the building was laid on December 7, 2010. Pastor Ohene-Asa Otu (now Kasoa CP District Minister and Deputy Evangelism Director), who took over from Pastor Sarfo, also saw to the progress of the project.

Since assuming duty as the Afienya District Minister in August 2016, Pastor Andrew Oduro Ampaw has worked hard towards the completion of the magnificent edifice, which will accommodate both the Central and English Assemblies respectively.

Speaking on the topic: “Now I Shall Praise The Lord” with Genesis 29:31-35 as his Bible reference, the Michel Camp District Minister, Pastor Lawrence Kwaku Affum said that the Ashaiman Area has every cause to praise the Lord considering the numerous challenges it has endured and how far the Lord has brought them.

“The Lord has been faithful to the Ashaiman Area and our individual lives from the beginning till now. It is time to give Him the praise He deserves,” he said.

In a remark, the Area Head, Apostle Ennin, who has a vision of dedicating 20 church buildings in the Ashiaman Area during his tenure, was grateful to the Lord, past and present ministers of the District as well as the membership for their immense contribution towards the completion of the church building. He blessed them for selfless sacrifices.

Present at the event were some past ministers of the District, namely Pastors Henry Kwabena Sarfo and Ohene-Asa Otu as well as the Member of Parliament for Wassa East, Hon. Isaac Adjei Mensah (an Elder of the Church)