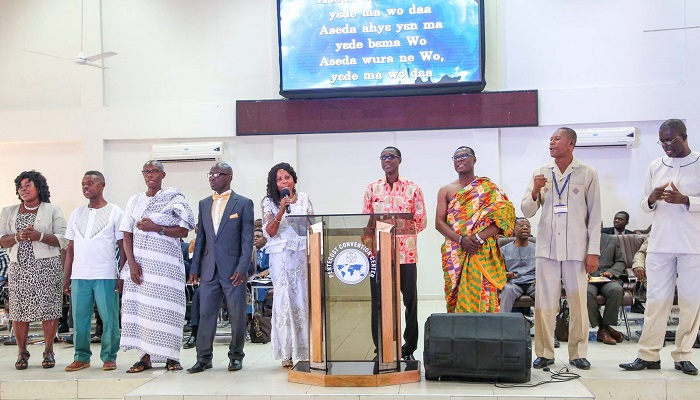 Eleven (11) Staff of The Church of Pentecost (COP) Headquarters have retired from active service after many years of meritorious service to God and the Church.

The retirement service was held on Wednesday, December 19, 2018, to climax the just-ended 22nd Head Office Management and Staff Retreat at the Pentecost Convention Centre (PCC), at Gomoa Fetteh, near Kasoa in the Central Region.

The event was officiated by the Chairman of The Church of Pentecost, Apostle Eric Nyamekye, with support from the General Secretary, Apostle Alexander Nana Yaw Kumi-Larbi and the International Missions Director (IMD), Apostle Emmanuel Gyesi-Addo.

Delivering a sermon on the topic: “Forsake Me Not When My Strength Is Spent” based on Psalm 71:4-11 and Psalm 37:26, 37, Apostle Eric Nyamekye said that all human beings have fears. These fears, he mentioned, include fear of darkness, fear of noise, fear of falling, fear of death and fear of tomorrow.

He, however, said that the two things that will secure one’s future and eliminate the fear of the future are “trusting in God and raising godly and responsible children.”

He encouraged the retiring staff to be steadfast in the Lord and trust that He would never forsake them in their old age.

Mrs. Comfort Owusu Afari joined The Church of Pentecost- Headquarters on March 5, 1980, as a Shorthand Typist and rose through the ranks to become a Principal Human Resource Officer.

Mr. Stephen Honu, on the other hand, was engaged in June 1983 as a Caretaker and was later promoted to Senior Security Guard.

Mr. Abraham Opintan, joined the Headquarters on February 1, as a Driver. He was promoted to Heavy Duty Driver, Deputy Chief Driver, Chief Driver and Transport Officer, a position he held until his retirement.

On March 1, 1992, the COP Headquarters employed Mr. Charles Kwesi Wiredu as a Senior Technical Officer. He later rose through the ranks to become the Senior Transport Manager at the Head Office.

Mrs. Grace Amo was engaged by the COP Head Office on September 1, 1998, and served as a Senior Cook.

Mr. Francis Gyasi Manu and Mr. Christian Agyekum, on the other hand, were both engaged by the Head Office in 2000 as Driver and Accounts Clerk respectively. They both served the Church meritoriously and were promoted to Senior Driver and Senior Accounts Officer in the course of their service.

Speaking on behalf of the retirees, Mrs. Comfort Owusu Afari, thanked the Lord Almighty for successfully leading them to the end of their service. They were also grateful to past and current leadership of the Church for their support during their time of service.

All retirees were prayed for and were also presented with a certificate of service and an undisclosed amount.