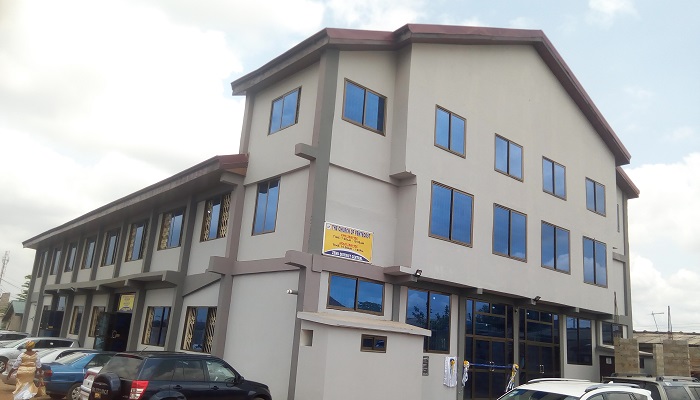 The Central Assembly Church Building of the Zenu District in the Ashaiman Area of The Church of Pentecost has been dedicated on Friday, August 16, 2019.

The assembly, which was carved out from Grace Assembly (formerly Moneomanye Assembly) under the Ashaiman North District, was opened by Pastor E. R. Bonney (of blessed memory) in 1994 through an evangelism outreach.

The foundation stone for the project was laid by the then Ashaiman Area Head, Apostle Nene Aholu Ofoe Amegatcher (Rtd.) with assistance from Pastor Charles Boamah Asante on August 14, 2014.

The 1200-seating capacity auditorium, which also has four (4) office spaces, two (2) conference rooms, washroom facilities, was funded through grants from Area and District as well as contributions from the Local Assembly.

Delivering the sermon at event on the topic: “Press On Towards The Mark To Win The Prize For Which Christ Called You” based on Philippians 3:12-14 and 2 Chronicles 7:5-6, Pastor Adu Acquah Milliman of Katamanso District, urged Christians to stay focused and work out their own salvation.

“We may obtain all life necessities or achieve our goals yet we must always put aside what has already been achieved and strain towards what is ahead of us so that we will bring good news to our families, the church, society, nation and the world at large,” he said.

Apostle Patrick Kingsley Ennin (Rtd.), on his part, expressed gratitude to the Lord for the great thing He has done. He encouraged members to be steadfast and make their relationship with the Lord an utmost priority.