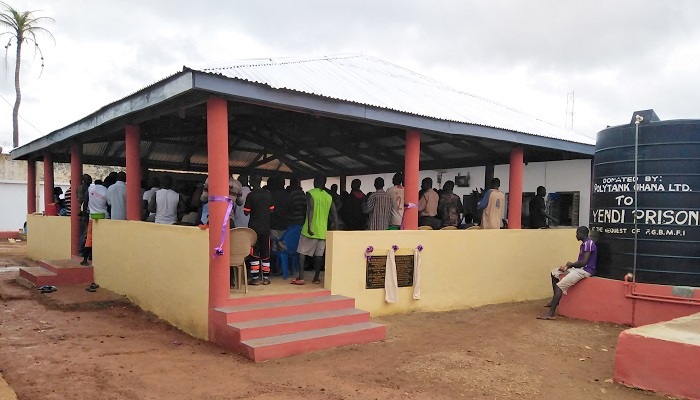 A place of worship has been constructed for inmates of the Yendi Local Prison in the Northern Region of Ghana.

The worship shed, which was jointly funded by The Church of Pentecost Headquarters and the Yendi Area, was dedicated and handed over to officials of the Prison by the Yendi Area Head, Apostle William Kojo Edzorhoho, on Friday, August 23, 2019.

The decision to construct the worship shed to provide an appropriate place of worship for inmates of the Yendi Local Prison was mooted by Apostle ADP James Tetteh, the Chaplain General of the Ghana Prisons Service and a minister of the church during a familiarization visit on February 16, 2019.

Subsequently, a sod was cut for the official commencement of the project on June 3, 2019 and work was completed in less than three months through the leadership of the Yendi Area Head, the supervision of Overseer Simon Kwarteng (Yendi Area Prisons Committee Chairman) and Overseer Jerry Ohene-Acquah (Yendi Area Estate Committee Chairman) as well as support of some officers and inmates of the Yendi Local Prison.

In a sermonette themed “Possessing Our Prisons for God” delivered at the ceremony, Overseer Isaac Berko of Tatale District noted that although the Prisons institution is one of the neglected institutions, God’s views it as an avenue for taking the nations for Christ.

Using the story of Paul and Silas in Acts 16:19-32 as a case study, he explained that God always has a purpose for His children and this sometimes involves going to neglected places like the prisons. He further stated that not all inmates ended up in prison as a result of a criminal act they perpetrated. He reiterated that confinement and hard labour alone does not bring about true transformation, rather, it is the presence of Jesus that truly transforms lives.

On his part, Apostle W. K. Edzorhoho revealed that “God wants to show His image, not just for persons outside of prison but also for our unfortunate brothers and sisters who also find themselves in prison.” He also prayed for all inmates of the Yendi Local Prison to be totally transformed by Jesus Christ.

As a symbolic gesture, Overseer James McKeown Safo donated a Bible to the Organisation of Islamic Cooperation (OIC) of the Yendi Local Prison.

Present at the ceremony were the Yendi Area pastorate and their spouses as well as some officials of the Prisons including ASP Samuel Yao Tanor (Regional Commander) and ADP Simon Yao Adzah (Organisation of Islamic Cooperation, Yendi Local Prison).

To the glory of God, thirty-six inmates and an officer of the Yendi Local Prison surrendered their lives to Christ during the event.