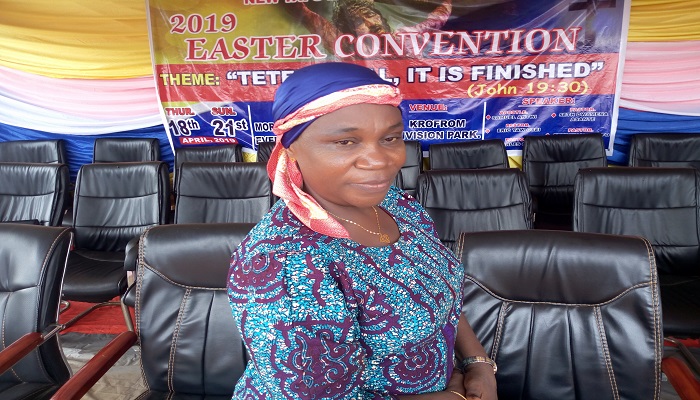 Sister Monica Boateng, a member of the Ashtown Assembly in the New Tafo District of The Church of Pentecost, has been miraculously healed of an acute burning sensation in her head. The spectacular event happened on Good Friday [April 19, 2019] during the New Tafo Zone Easter Convention held at the Krofrom M/A Division School Park in Kumasi.

On that fateful day, Sister Monica attended a two-hour prayer session in the afternoon purposely for Holy Spirit baptism, healing and deliverance. The session was spearheaded by the Zonal Prayer Team, led by Pastor Charles Oduro of Yennyawoso District. In the course of the prayers, she was touched by the power of the Holy Spirit and was instantly healed.

Narrating her testimony after her miraculous healing, Sister Monica, who was full of joy and thankful to the Lord Jesus, said about three weeks ago she visited her mother in their family house at Ashtown. According to her, when she was returning home, she sensed that someone was following her. She turned but did not see anyone. “Suddenly, I felt a severe burning sensation in my head which even caused me to throw the mobile phone I was holding into water,” she added.

According to her, the pain was so severe that she could not even sleep. She had been in that condition until her encounter with Jesus Christ on the Good Friday.

She further revealed that, her elder sister once found herself in the same condition which nearly resulted in madness, so she was afraid she might end up in the same situation but the Lord has intervened.

Undoubtedly, the healing power of our Lord Jesus Christ continues unabated as He heals all kinds of ailments.