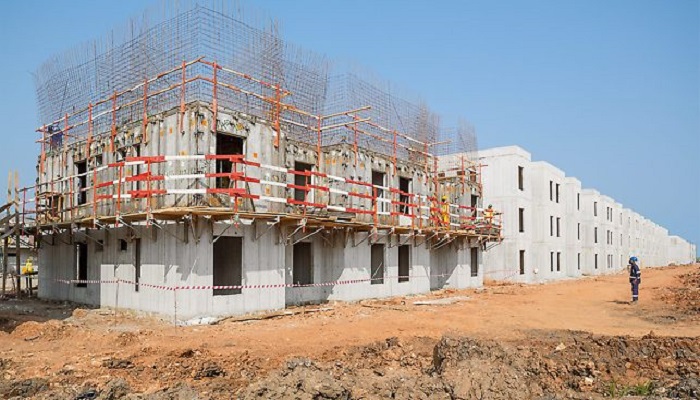 A $5-BILLION housing project expected to provide 100,000 housing units across the country has been inaugurated at Afuaman in the Ga West Municipality in the Greater Accra Region.

The project, which is being facilitated by the Ministry of Works and Housing, is to be undertaken by the United Nations Office of Project Services (UNOPS) and Sustainable Housing Solutions (SHS) Limited, a social housing development company. It is to be completed within eight years to bridge the country’s housing deficit.

The Vice-President, Dr. Mahamudu Bawumia, who inaugurated the project at Afuaman yesterday, noted that aside from food and clothing, shelter was the next important need of man.

As part of the project, he said, factories would be constructed in the country for the production of building panels, saying, “I have been informed that the first factory is to be established in Tema.”

According to him, the objective for the project was in consonance with the government’s policy of providing adequate, decent and affordable housing for Ghanaians.

He said Ghana’s inability to meet the housing needs of the citizenry had created a huge backlog, with a housing supply requirement of about 150,000 units per annum.

“The uniqueness of this project is that funding is solely provided by the UNOPS, with the government playing a facilitating role through the Ministry of Works and Housing. The programme arrangement does not impose any financial liability on the government and requires no government guarantees,” Dr. Bawumia indicated. Adding that, “we are miles away from overcoming the challenges facing the housing sector in Ghana.”

He said the selection of Ghana for the project was subjected to a rigorous and comprehensive due diligence process to ensure a positive environmental, social and economic impact, with financial returns for private sector investors.

According to him, Ghana was one of two countries in Africa that made it through the vetting process for the project and expressed appreciation to the UNOPS and the SHS for the gesture.

As part of efforts at addressing the housing deficit in the country, he said, the government had forged strategic partnerships with the private sector for affordable housing projects.

In line with that, he said, it was collaborating with the UNOPS and the SHS to deliver an affordable housing model, which would include not only homes but also a mortgage system to enable Ghanaian workers to purchase homes that came with the necessary amenities.

The Deputy Minister of Works and Housing, Mrs. Barbara Asher Ayisi, observed that population growth and rapid urbanization had made housing a major challenge in many cities across the country.

She, therefore, expressed appreciation to the management and staff of the UNOPS and the SHS for the initiative, saying the project would go a long way to increase the country’s housing stock.

The UN Under-Secretary General and Executive Director of the UNOPS, Ms. Grete Faremo, said 6,500 of the houses would be cited at Afuaman.

She said the project would be a game-changer, which, apart from providing affordable homes, would also provide jobs for the people.

The UN General Assembly has mandated its project services department (UNOPS) to identify and expand its capacity worldwide to cover peace, security and humanitarian services for beneficiary countries.

Following stakeholder discussions, the government signed a memorandum of understanding (MoU) with the UNOPS which spelt out their commitments and desired outcomes of a social housing model during the UN General Assembly in New York in September last year.