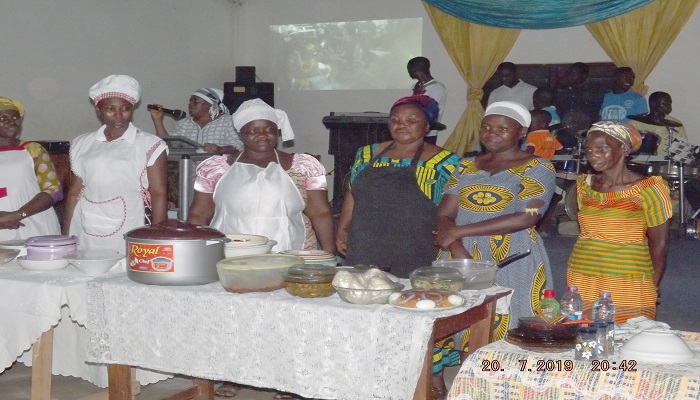 The Twifo Mampong District of The Church of Pentecost in the Assin Foso Area has celebrated its first District Variety Week.

The programme took place at the Mampong Central church building from Monday, July 15 to Sunday, July 21, 2019, under the auspices of the District Minister, Pastor Sampson Abradu. It was aimed at fostering oneness among the members and the people in and around the area.

Among the activities that took place during the week were word ministration, praises and worship, Bible quiz and ‘pick and act.’ The rest included games, cook art, drama and cultural display. There was also a prayer marathon from 8:00 a.m. to 3:00 p.m. on Friday, July 19, where the members prayed to God individually on their own under no specific direction.

Some of the members engaged in both indoor and outdoor games such as ludo, Ampe, Oware, skipping, volleyball and football.

The cook art was participated among the Men’s Ministry, Women’s Ministry, Virtuous Ladies and Youth Ministry. Different kinds of foods such as Aprapransa, Gari Jollof, Kokonte with groundnut soup and boiled plantain with Kontomire stew, among others, were prepared and exhibited. The judges, led by the wife of the District Minister, Mrs Rejoice Abradu, commended the participants for their high sense of professionalism and exuberance they demonstrated in the preparation of their meals.

Assorted gifts were given to those who excelled in the Bible quiz and ‘pick and act’ activities to encourage others to be studious and also get involved in all the activities that the Church organizes in the subsequent years.

During the cultural display, the members dressed in their colourful traditional clothes to mark the programme. This was amidst singing of traditional songs and dance rendered by the various ethnic groups such as the Dangmes, Ewes, Akans and the Guans, among others.

Addressing the congregation to climax the week, the District Minister, Pastor Sampson Abradu, read from Proverbs 3:9-10 and Numbers 25:10-12, and based his message on the theme, “Honour God With Your Substances and Activate Your Blessing.” He encouraged the congregation to use whatever God has given them to help expand His work.

He stated that God has promised to spread His message of salvation to all the people worldwide through The Church of Pentecost and, as such, they are to avail themselves to the work of God.

“God knows why He has called you into His church. Honour Him with whatever you have, and you will attract His blessings to yourself,” he said.