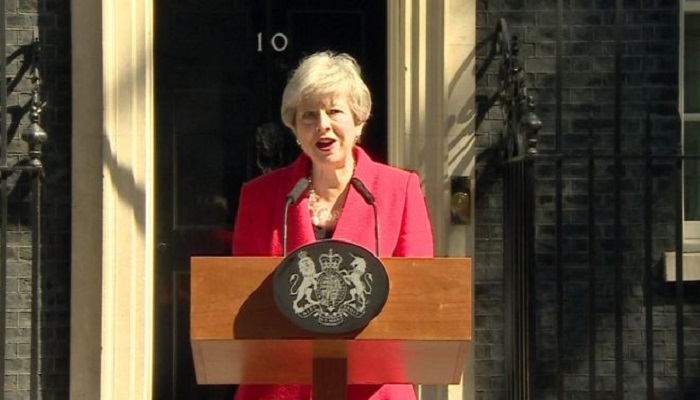 In an emotional statement in Downing Street Mrs May said she had “done my best” to honour the 2016 EU referendum result.

It would remain a matter of “deep regret” that she had been unable to deliver Brexit, she added.

But a new PM was “in the best interests of the country.”

Mrs May said she will continue to serve as prime minister while a Conservative leadership contest takes place.

She will step down as Tory leader on 7 June and a leadership contest is due to begin the following week.

She has been under pressure to resign, after a backlash by her own MPs against her latest Brexit plan.

Since January, Parliament has rejected the withdrawal agreement Mrs May negotiated with the EU three times. Recent attempts to find a formal compromise with Labour also failed.

Mrs May had planned to publish the Withdrawal Agreement Bill on Friday – the legislation required to bring the agreement into UK law – describing it as “one last chance” to deliver Brexit.

However, her proposals – including a customs union arrangement and an offer to give MPs a vote on holding another referendum – angered many Tories.

Labour said it was a “rehash” and they would not support the plans.

Sir Graham Brady, the chairman of the 1922 Committee of Conservative backbenchers, is meeting the prime minister on Friday morning.

It is thought she faced the possibility of further moves by Conservative MPs to instigate a vote of no confidence in her, if she did not name the date of her departure.

Andrea Leadsom quit as Commons leader on Wednesday evening saying she no longer believed the government’s approach would “deliver on the referendum result”.

And on Thursday, Mrs May met Home Secretary Sajid Javid and Foreign Secretary Jeremy Hunt at Downing Street, where they are understood to have expressed their concerns about the bill.

BBC political editor Laura Kuenssberg says several cabinet ministers have said they expect Mrs May to announce her departure on Friday morning, although there has been no confirmation from Downing Street.

Ministers hope the campaign for the next Conservative Party leader can be finished by the end of July.

Unless something extremely strange happens in the next couple of days, it is now, really, nearly over.

Why now though? It’s not as if Theresa May’s been having an easy time of it for months.

You guessed it, it’s Brexit, and what’s accelerated her departure was trying – again – to put her Brexit plans to Parliament.

A leadership contest beginning on 10 June would come after the state visit from US President Donald Trump and the Peterborough by-election.

But former cabinet minister Ken Clarke told BBC Radio 4’s Today programme: “The idea that he’s a shoo-in is nonsense … the person expected to win hasn’t won one of these for a very long time as far as I can recall.”

He said he expected a “chaotic six weeks” to follow, “a possibly harmful diversion from the deadlock on the European Union”.

“We’ve got to make sure the whole thing is conducted in an atmosphere which doesn’t add to the air of tragic farce which has already been surrounding the party and European issue for the last 12 months.”

On Thursday, the UK voted in the European Parliamentary elections, two months after it was originally due to leave the European Union.

Results will not begin to be announced until Sunday night, after voting concludes across the EU.

The prime minister had already pledged to set a timetable for a new leader to take over, once MPs have voted on the Withdrawal Agreement Bill.

But calls for her to leave sooner began to come from Conservatives who had, until now, stayed loyal.