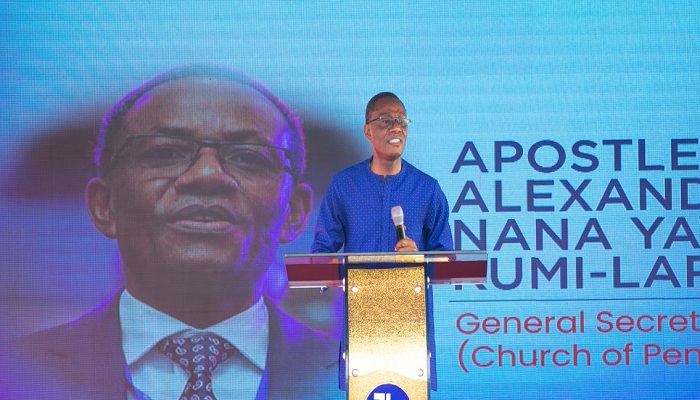 The General Secretary of The Church of Pentecost, Apostle Alexander Nana Yaw Kumi-Larbi, has implored Christians to live above reproach in order to transform the fortunes of Ghana.

He bemoaned that Ghana, which boasts of over 70% of her nationals professing to the Christians, is bleeding with endemic corruption which has retarded the progress of the nation.

Apostle Kumi-Larbi said this when addressing management and staff of Jospong Group of Companies during their Annual Thanksgiving Service held at the Group’s head office in Accra on Monday, December 9, 2019.

Speaking on the theme, “Integrity: A Virtue for Nation Building,” the General Secretary said that integrity is a virtue most needed in Ghana now to bring the nation back to track.

“We have integrity crisis in our nation. Our nation critically needs leaders with integrity; people who cannot be bought; people who walk the talk; people who do not use their positions to amass wealth.

“We are all crying for our nation. Ghana is bleeding. We are not poor because we have the men like Zoomlion [Dr Joseph Siaw Agyepong] whom God gives dreams to turn things around. We have natural resources and all that it takes to develop as a nation, yet we are poor. It’s because we don’t have people of integrity,” he decried.

He was worried that Ghana has come to a stage whereby those who want to ensure the right thing being done, face stiff opposition because everybody has resorted to shortcut which the majority think is the norm. “If we have over 70% of people in this nation professing to be Christians and we all want to resign to the norm which is not biblically acceptable, then I dare to say that there is no future for this nation,” he stated.

Defining integrity as the quality of being honest and having sound moral principles; wholeness, soundness, simplicity, sincerity as opposed to mixed fraction, duplicity, hypocrisy and deception, he stated that the Christian with integrity is sound, reliable, trustworthy and, therefore, can be described as dependable.

Apostle Kumi-Larbi read from the Nehemiah chapter 5 and explained that Nehemiah who was in a privileged position did not use his position to manipulate the people who were in distress condition so as to amass wealth for himself. Instead, he went into his reserve and used what he had gathered to feed the people.

He also touched on Isaac and his family in Genesis chapters 25, 26 and 27, who were engrossed in deception, duplicity and act of corruption. He explained how these vices broke the family apart, leading to hatred between his two sons (Esau and Jacob).

Also referring to Proverbs 14:34 (righteousness exalts a nation, but sin is a reproach to any people), Apostle Kumi-Larbi said that if one lives right the nation progresses, but if the citizenry is involved in sin and corruption they become a reproach.

He identified some of the areas of corruption as bribery, embezzlement, fraud, favouritism, extortion, illegal contribution, nepotism, conflict of interest, abuse of discretion, payment of facilitation fees, procurement breaches, tax evasions, over-invoicing and under-invoicing, and land tenure system – where people sell same land to many people.

Quoting Charles Spurgeon who once wrote, “Do right if heaven itself should grieve. If the skies should not be propped except by a lie, let them fall. Come what may, you never must in any degree or in any shape depart from the honest, the true, the right, the Christ-like, that which God commands, that which alone God will approve,” Apostle Kumi-Larbi charged the gathering never to depart from being honest, truthful and Christlike character in all their dealings.

The General Secretary called on the church to take its rightful position as the prophetic voice of the nation in order to arrest the situation, saying, “The church should arise. The church is not there for pastors to amass wealth; the church is there to speak the truth to the people who come to church to be transformed so that when they go out to their workplaces they would be agents of transformation.”

He added: “We as Men of God cannot live in a nation with all these resources, yet our people live in abject poverty. As a General Secretary of this big church [The Church of Pentecost] which commands about 3million members – about 10% of the Ghanaian population who have subscribed to our faith, we are not going to sit unconcern. We will tackle the issues head-on. 2020 is a year of no corruption and it should start from the house of the Lord – pastors should be prepared to purge themselves of all corrupt practices, then leaders follow suit, then the members. Once we are able to do that, the glory of the Lord will be experienced in the land and there will be prosperity in the land. The church must show the way and lead the fight against corruption and call people to order; that is the prophetic mandate of the church.”

This year’s thanksgiving service which is under the theme, “Because of the Lord’s Great Love, We Are Not Consumed”… Lamentations 3:22, started on Monday and will end on Friday, December 13, 2019, with the guest speakers being Apostle Alexander Nana Yaw Kumi-Larbi, Apostle Samuel Nana Yaw Agyei (Pentecost Convention Centre Manager), Rev. Dr Steven Wengam of Cedar Mountain Chapel, Apostle Dr Alfred Koduah (Teshie-Nungua Area Head of The Church of Pentecost) and Apostle General Sam Korankye-Ankrah (General Overseer of Royalhouse International).