The Resurrection Of Jesus Makes Christianity An Exclusive Religion – Chairman 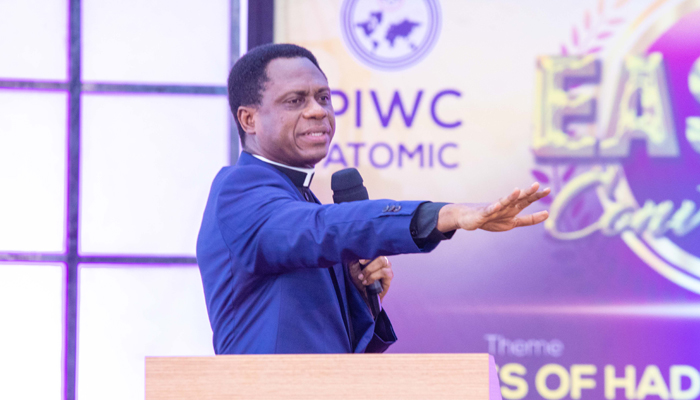 The Resurrection Of Jesus Makes Christianity An Exclusive Religion – Chairman

The Chairman of The Church of Pentecost, Apostle Eric Nyamekye, has asserted that Christianity is unique from all other religions because of the resurrection of Jesus Christ.

The Chairman said this in a sermon on Easter Sunday at the Atomic branch of the Pentecost International Worship Centre (PIWC-Atomic) in Accra, when he and his family fellowshipped with the congregation to climax the 2019 Easter convention.

This year’s Easter convention of the PIWC-Atomic was held on the theme, “The Gates of Hades Will Not Overcome It,” taken from Matthew 16:18b. Present at the well-attended service were: Apostle Dr. Emmanuel Kwesi Anim (Principal of the Pentecost Theological Seminary, Gomoa Fetteh), Pastor Samuel Obuobi (the Resident Minister), and Rev. Prof. Emmanuel Kingsley Larbi (Associate Pastor).

Referring to 2 Timothy 2:1-8, Apostle Nyamekye explained that the knowledge and fact of the resurrection is the foundation of ministry, the sustainer of ministry, the cost of effective ministry and anchor of the believer, saying, “Christianity has no value when it’s taken out.”

He encouraged believers to always remember that Jesus Christ was a descendant of David who was raised from the dead, because it was impossible for death to keep its hold on Him as it is written in the Bible.

“We don’t need anointing oil; we don’t need soda or any other thing because by the gospel we are saved and it is enough that Jesus died and resurrected, and we should hold firmly to the gospel,” he said, adding, “If Christ has not been raised from the dead, our preaching is useless and so with our faith.”

Referring to 1 John 5:10, the Chairman said: “All who believe in the Son of God know that the resurrection is a fact. Because the resurrection is not just an event but is a life-giving event, it changes life and we the believers are testimonies to that.”

“By the resurrection power, we have been called into holy living, and we will rise again at the sound of the trumpet,” he said.

He concluded by urging the congregation to go out to proclaim the gospel and possess the nations, because they have the power of the resurrection in them.