The Church of Pentecost Holds Stakeholders’ Meeting On Sanitation 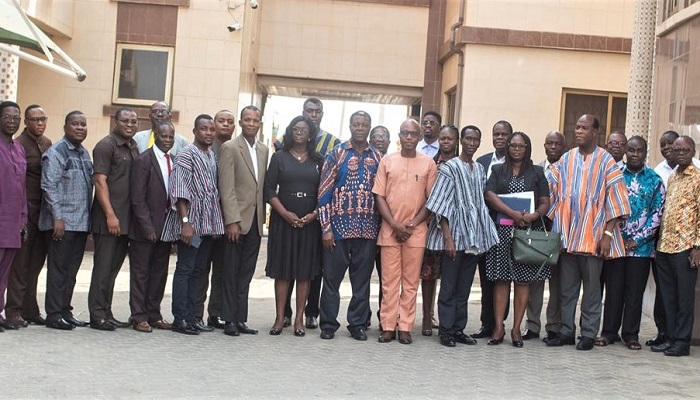 The Church of Pentecost Holds Stakeholders’ Meeting On Sanitation

A consultative stakeholders meeting was held on January 16, 2020, at the Headquarters of The Church of Pentecost at La in Accra to discuss some pragmatic solutions to the sanitation problems in the country.

The meeting, which was held on the instance of The Church of Pentecost, is part of efforts by the church to solicit the involvement of all key stakeholders in its Environmental Care Campaign initiative so as to yield the desired results.

Among the stakeholders present were representatives from some key governmental institutions such as Ministry of Sanitation and Water Resources (MSWR), Ministry of Environment Science Technology and Innovation (MESTI), Ministry of Local Government and Rural Development (MLGRD), Forestry Commission and the National Commission for Civic Education (NCCE).

Addressing the gathering, Apostle Samuel Gakpetor underlined the church’s resolve to see an improvement in the sanitary conditions of the country through its Environmental Care Campaign. Through the initiative, he noted, the church embarked on nationwide clean-up exercises aimed at ridding the country of filth and creating awareness about environmental care. In addition, the church also educated its members and the general public about environmental consciousness through its training manuals and media outlets. “We also undertook some community-based initiatives related to the environment,” he added.

Apostle Gakpetor explained that, although the campaign was generally successful, the desired impact is yet to be felt, hence the need to adopt a different approach by bringing all stakeholders on board to come up with a more pragmatic and effective solution to the problem.

He also revealed that the church has set aside the 24th to 28th February for Environmental Care activities in schools, churches, mosques, marketplaces and lorry stations, among others

In his submission, the Deputy Sanitation Minister, Hon. Michael Gyato, lauded The Church of Pentecost for the sanitation drive which seeks to augment the efforts of his outfit. He said that the sanitation ministry is very committed to partnering the church in this regard since the campaign aligns with the President of Ghana’s vision of making Accra the cleanest city on the continent. He, however, noted that there is the need to involve other faith-based organisations and traditional authorities if the drive is to achieve the desired results.

Hon. Gyato also stressed that the education of the citizenry on the need to care for the environment is the core solution to the sanitation challenge in the country. He said that countless clean-up exercises have been undertaken to no avail because the majority of Ghanaians continue to dispose of waste indiscriminately. He said that instead of cleaning up the mess, it is expedient to employ all avenues and strategies to educate the masses to change their negative attitudes towards the environment.

Apostle Dr Koduah, on his part, called for a more radical approach through the enforcement of environmental by-laws at all levels. He proposed to the Sanitation Ministry to consider introducing a sanitation league to rank the cleanest and dirtiest districts to help build the culture of cleanliness in the country.

“We keep achieving the same results because we keep doing the same things. There is the need for a more radical approach to deal with the problem once and forever and I think this is the way to go. After all, no group of people would want to have the tag of the dirtiest city placed on them. When this happens, they would sit up and do something about it,” he said.

There were also recommendations and contributions from the various representatives on how their respective institutions could support the campaign.

The meeting ended with all parties expressing their commitment to the successful and effective implementation Environmental Care Campaign for maximum impact.