Teshie-Nungua Area Liaises With Local Authorities To Clean The Environment 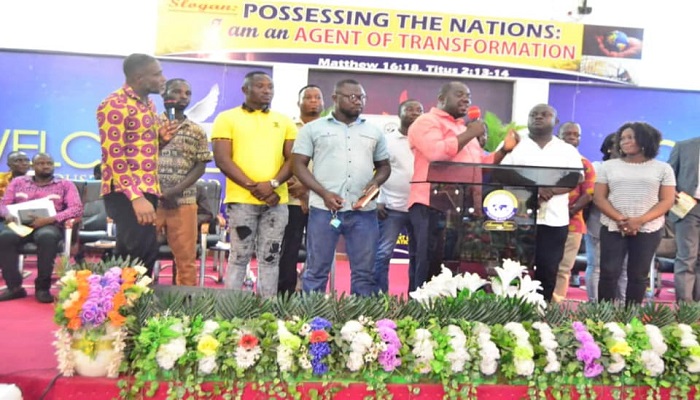 Teshie-Nungua Area Liaises With Local Authorities To Clean The Environment

The Teshie-Nungua Area of The Church of Pentecost on Monday, February 24, 2020, launched the Environmental Care Campaign at various zonal centres in the Area.

The launched was immediately followed with public education in various schools and public places in Teshie, Nungua and Klagon and their environs, led by the Area Head, Apostle Dr. Alfred Koduah.

Speaking at the launch of the Campaign in the Sakumono Zone at the F. E. Antwi Temple, the Tema West Municipal Chief Executive Officer (MCE), Hon. Mrs. Adwoa Amoako, urged the residents to see environmental sanitation as their obligation to ensure clean surroundings as well as protect them from diseases.

Also addressing participants at the launch of the campaign in Lashibi District, Hon. Adwoa Amoako, in a speech read on her behalf, called for serious attention to be given to waste management in the country.

She, therefore, commended The Church of Pentecost for taking up the challenge to lead the crusade for cleanliness in Ghana and indicated the assembly’s preparedness to support the church to make it a success.

“This effort by the church could not have come at a better time when everybody including international, national and local organisations are calling for a change of attitude towards the environment,” she said.

She added: “It is against this background that the Akufo-Addo administration has taken it upon itself to make Accra the cleanest city in West Africa. This programme cannot be achieved if we as a people do not change or attitudes towards issues related to sanitation.”

According to the Tema West MCE, the Municipal Assembly has begun prosecuting sanitation offenders to serve as a deterrent to people who cause public nuisance.

This, she said, has proved positive as it has helped reduced environmental sanitation issues in the municipality.

The Member of Parliament for Banda, Hon. Ahmed Ibrahim, urged the members to portray Christ by keeping clean surroundings while urging their neighbours to do same.

The District Minister for Lashibi, Pastor David Alex Adwere, who chaired the occasioned entreated Christians to participate in the sanitation programme of the church.

He said the Environmental Care Campaign is part of the initiative of the Vision 2023 of ‘Possessing the Nations.’

The United Nations in its global development goals of 2015 mandated countries to work toward achieving universal access to basic sanitation by 2030.

The meeting was attended by the Municipal Environmental Health Officer, Assembly members, school heads, pupils, among other stakeholders in the municipality.