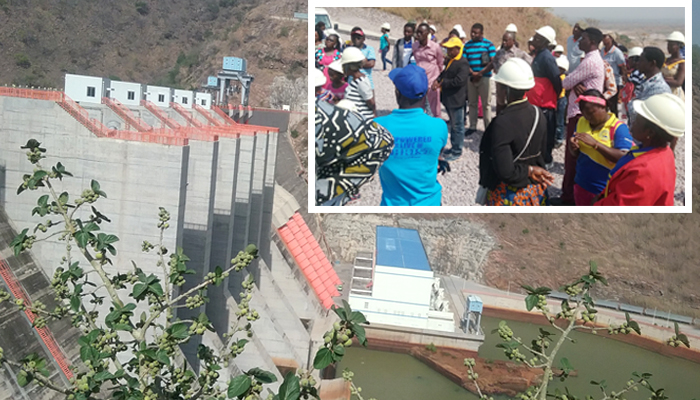 Ministers and their families in the Techiman Area of The Church of Pentecost have visited the Bui Hydroelectric Dam, situated on the Black Volta in the Banda District of the Bono Region.

The trip which took place on 3rd January 2019, took about two hours from Techiman. It was a very exciting one as ministers and their families fraternized. There were nervous moments though when they got to the peak of the dam which was over 50m above sea level. Many could be seen keeping tight grips of their children.

The Bui Dam produces about 400 megawatts of power for the national grid. It officially started operations in 2013 and has been a reliable source of power till now.

According to the Community Relations Officer, Mr. Clement Anane, Bui power is mainly a standby power supplier during emergency power shortage and at the peak of power usage in the country.

Giving a brief history of the Dam, Mr. Anane revealed that the site for the dam was discovered in the 1920s by a British researcher called Albert Kitson who recommended it to the Government of Ghana.

He mentioned that the suitability of the place is due to the mountains that surround the river making the construction of the dam relatively cheaper. He continued that prospective governments had tried building the dam but could not achieve that due to financial constraints.

However, he said, in 2007 Ghana in collaboration with a Chinese company was able to start the project and in 2013 it was completed and commissioned. He further explained that modern technologies were used to build the dam which makes it use both active and reactive powers, saying, “Meaning it can even produce power even when there is inadequate water in the dam.”