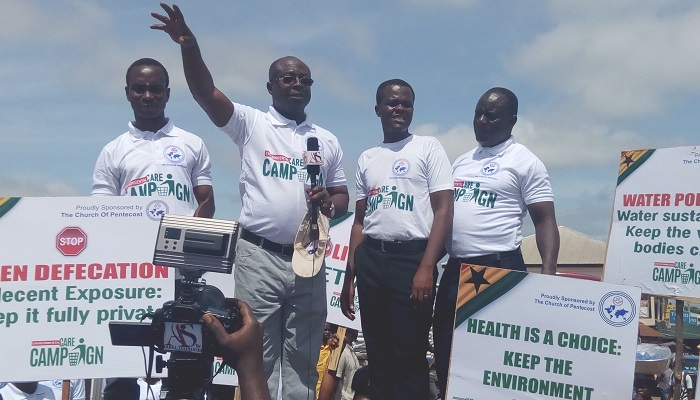 The Techiman Area of The Church of Pentecost has organised an environmental care campaign and clean-up exercise at Techiman, the Bono East Regional capital.

The event which took place on Saturday, May 19, 2019, was in line with the Church’s aim of influencing society with Christian values. Present at the event were the Area Head, Apostle Julius Franklin Asante-Ayeh, the Techiman North Municipal Chief Executive (MCE), Honourable Prince Donyina, the Adontenhene of Techiman Traditional Area, Nana Asare Twi Berempong, the clergy, officers and members of the Church.

In his speech, Apostle Asante-Ayeh explained that it is the vision of The Church of Pentecost to partner government to help develop the nation. “One way of doing that is through cleanliness, hence the environmental care campaign,” he said.

He read from Deuteronomy 23:11-14 to explain how important hygiene is to God. “God takes particular interest in the cleanliness of His people so He gave special regulations to the Israelites on how they should treat their human excreta,” he emphasized.

Apostle Asante-Ayeh then charged the members to make cleanliness a part of their daily lives.

He seized the opportunity to appeal to the city authorities to make by-laws governing sanitation and enforce same.

The MCE, Hon. Prince Doyinah, pledged his commitment to ensuring the cleanliness of the city. “Cleanliness is one of the development indicators, and that it should be a prime concern of all individuals,” he said.

He thanked The Church of Pentecost for the bold initiative. He pleaded that the campaign will be replicated in other communities outside the municipality.

Adontenhene Nana Berempong was grateful that a great church like The Church of Pentecost has taken upon itself to chart this course. He was worried about how refuse is disposed indiscriminately in the municipality which is destroying the environment, especially water bodies. “If we don’t take care we will import drinking water in the near future,” he asserted.

He entreated the citizenry to practice environmental cleanliness in their homes so that the campaign will not be a nine-day wonder.

The launch was followed by a clean-up exercise in the principal streets of Techiman, through the Kumasi Station and ended at the Wa Station.

Apostle Asante-Ayeh thanked the Area Coordinator, Pastor Eric Owusu and his team for the effective organisation of the programme as well as the members for their active participation. He advised that they continue to uphold cleanliness in their vicinities and workplaces so that others can learn from them.

“Go and be agents of transformation in your communities. Be examples to others by keeping your environment clean and educate them to replicate same,” he charged the members.