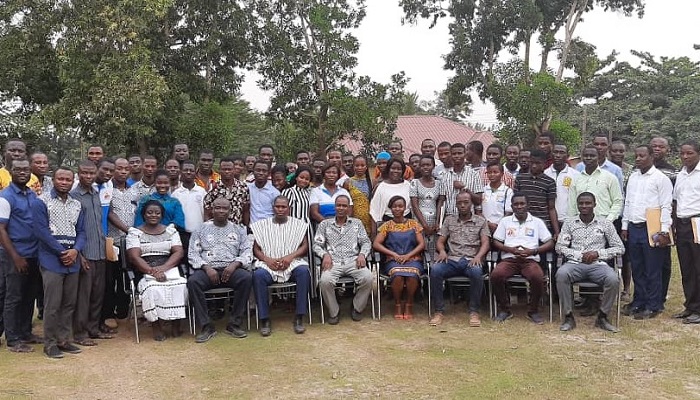 The participants were welcomed to the event by the Area Youth Ministry Secretary, Elder Joshua Bedjoe.

In his welcome address, Elder Bedjoe explained the need for Youth Leaders to come together at the beginning of the year to pray and seek divine strength for the year. He then led participants through an intensive prayer session. As part of the session, intercessory prayers were said for the ministers, officers, the church and the nation.

Speaking on the theme: “Be Strengthened in Word and Deed” on the second day of the summit, Pastor Joseph Tasimo of Gwira Essiem District, he admonished leaders to be well-grounded in the word of God. This, he said, is the antidote to false teachings and half-baked doctrines.

“We are living in an era where people are willing to sacrifice sound doctrines for secular humanistic philosophies,” he cautioned.

Quoting 2 Thessalonians 2:8-17, he emphasized that, the word of God is the measuring rod for every decision and the foundation for very sound teaching. Therefore, the believer must know what God has said through His son-Jesus Christ so that they will be able to stand firm in the truth.

He concluded by saying that; “let us allow the word of God to take over our hearts so that we can bear fruits that last.”

After the exhortation, Abraham Nana Bamfo Oppong, the Area Youth Pastor, took participants through the training session. Some of the topics treated during the session include Leading Young People, The Working Philosophy and the Implementation Plan of Vision 2023, and the Discipleship Mandate, Unleashing Mandate and the Holistic Development Mandate.

He admonished leaders to be guided by the vision document in planning their activities for the year. He also enlightened participants about the Home and Urban Missions (HUM) – a new ministry intervention of The Church of Pentecost birthed by Vision 2023.

The summit was climaxed by reading and auditing of the End-of-Year reports by the various Districts.

Giving the closing remarks, Pastor Abraham Nana Bamfo Oppong commended the Youth Ministry leaders for the great work done during the previous year and encouraged them to do much more in the New Year.

A total of eighty-nine (89) participants were recorded at the event. Also, in attendance were Pastor Stephen and Mrs Cecilia Appiah of Wassa Nsuta District, Elder Prof Kumi Boateng and Mrs Mavis Oppong.