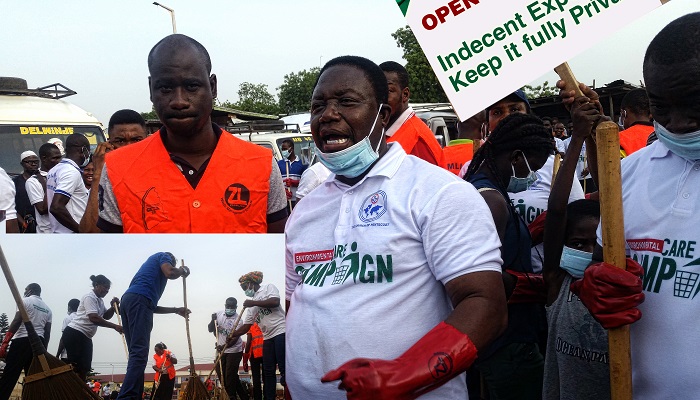 The Tamale Area of The Church of Pentecost under the leadership of Apostle Isaac Nii Kotei Djani, on Tuesday, March 26, 2019, launched the Area Environmental Care Campaign at the Tishegu Central Church auditorium in Tamale.

Speaking at the launch, Apostle Kotei Djani said Vision 2023 of The Church of Pentecost captures areas of great concern to the Church and the nation as well, one of which is creation care. He stressed that the church has been called out of the world to belong to God and sent back to the world to witness and to serve.

He called on Christians to help transform every sphere of society with values and principles of the Kingdom of God. He added that, the church has developed various strategies to run the Environmental Care campaign under the slogan, ‘Environmental Care, My Responsibility.’

Apostle Kotei Djani further said that, in line with the President of the Republic of Ghana, Nana Addo Dankwa Akuffo-Addo’s vision to have a clean Ghana, the Church is also joining in to ensure a clean and better Ghana. He urged everyone present at the occasion to help make Ghana a better place by supporting the Church’s campaign on environmental care and help eradicate filth in our surroundings.

He later outlined some of the Church’s initiatives to support the government’s development agenda, which include construction of Community-based Health Planning Services (CHPS), bus stops, tree planting exercise and distribution of free bins in collaboration with Zoomlion, among others.

The Manager of Zoomlion Ghana Limited in Tamale, Mr. Peter Dawuni, was grateful to the Church for such an initiative to keep Ghana clean which has been the dream of the company.

Mr. Dawuni called on Ghanaians to change their attitudes towards the environment in order to sustain the Church’s campaign. He also called for the enforcement of environmental by-laws by the metropolitan/municipal/district assemblies to help sustain the campaign.

His outfit provided 25,000 bins to be distributed across the Northern region as part of Zoomlion’s support of the Church’s initiative.

Speaking on behalf of the Chief of Sagnarigu, Yaa Naa Yakuba Abdulai, Mohammed Fusai Talinaa said a healthy environment is good for national growth and development. He again said the rampant felling down of trees which has become a habit among some people in the area is disturbing the environment. He, therefore, called on residents to desist from such acts and also promised the chiefs full support of the laudable initiative.

Other governmental officials who were present also gave their full support of the campaign.