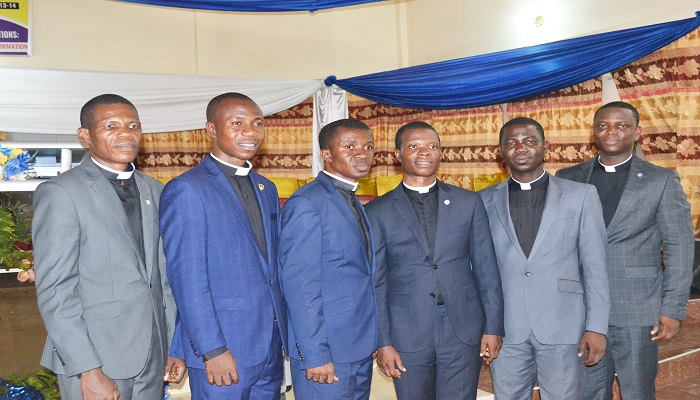 The Suhum Area of The Church of Pentecost has organized an ordination service for six Overseers in the Area who have been called into the Pastorate.

The six were called into the Pastorate during the 16th Extraordinary Council Meetings held recently at the Pentecost Convention Centre, Gomoa Fetteh.

Speaking at the service on the topic, “Growing to be like Jesus: A way of Possessing Nations” with Bible texts from Genesis 1:26 and Luke 2:52, Prophet Robert Dentu admonished Christians to acknowledge that God exists, and that He is the creator of the world.

Prophet Dentu explained that at creation, God gave man the reasoning power to evangelize and possess nations. He bemoaned that some people are rather using the reasoning power in committing vices such as kidnapping, armed robbery, stealing, and murder. “Christians should make effective use of this reasoning power positively by changing the world,” he stressed.

Touching on the relational power given by God at creation, the Nkawkaw Area Head reiterated that God wants Christians to live in harmony with one another. He urged Christians to avoid bitterness and strife in their lives but instead, love one another because God is preparing the church that is filled with love.

Prophet Dentu expounded that the world has reached a critical point where people are using artificial intelligence in manipulating the world instead of total dependence on God’s wisdom. He admonished Christians to always rely on the Holy Spirit who gives the power to live and witness about Christ.

Present at the service were ministers and their wives, officers and members in the Area, and Deaconess Eunice Johnson (composer).