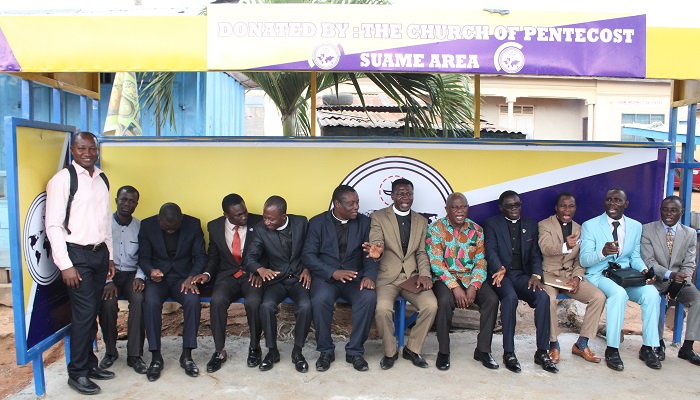 The Suame Area of The Church of Pentecost has erected a Bus Stop shelter at the Asamankama Taxi Rank in the Offinso District.

The Offinso Bus Stop is one of the two Bus Stop shelter projects being embarked on by the Area in line with Vision 2023 of the church, which seeks to influence every sphere of society with the values and principles of the Kingdom of God.

The Bus Stop shelter, which was constructed at a total cost of GH₵6,000.00, was dedicated during a short handing-over ceremony on Tuesday, August 27, 2019.

The dedication ceremony was officiated by the Suame Area Head, Apostle M. C. Asiedu, with assistance from the pastorate in the Area. He indicated that the Bus Stop shelter was one of the many projects to be undertaken by the church towards national development.

He stated some of the major projects to be undertaken by the church in line with the Vision 2023 Working Document. He mentioned, in particular, the building of three Police Stations with residential apartments and the building of prisons facilities at Nsawam and Ejura to eliminate overcrowding in Ghana’s prisons.

Apostle Asiedu reminded the gathering to remain grounded in the faith during their Christian journey on earth. “Let us be mindful of the fact that our life on earth is a transition, each one is heading towards a destination of choice,” he said.

The Municipal Chief Executive (MCE) for Offinso South, Hon. Solomon Kesse and the Assembly Member for the Asamankama Electoral Area, Hon. Emmanuel Acheampong thanked the church for the kind gesture and the church’s contribution towards environmental care and sanitation among other projects geared towards national development.

In attendance were officers and members within the Suame Area, representatives of the Local Council of Churches in Offinso, and some community members.

The Area aims to construct its second Bus Stop shelter at Tarkwa, Maakro junction in the Suame Municipality.