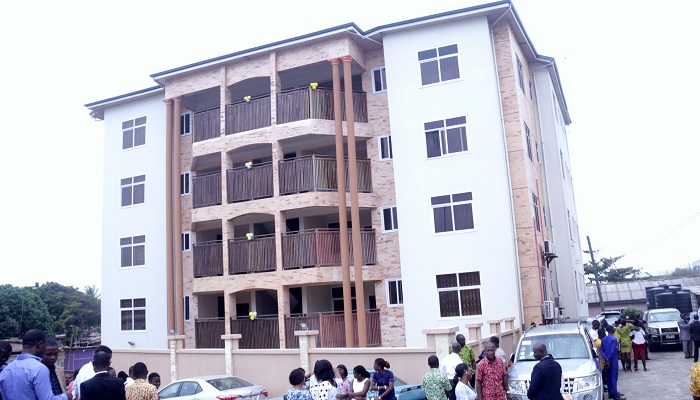 A special ceremony was held on Sunday, September 1, 2019 at the South La Assembly to dedicate the newly-constructed place of residence for some ministers of The Church of Pentecost within the La enclave.

The event, which was officiated by the General Secretary, Apostle Alexander Nana Yaw Kumi-Larbi, had in attendance Apostle Dr. Daniel Walker (Executive Council Member and Rector of Pentecost University College), Apostle John Osei Amaniampong (La Area Area) and other ministers of the church.

The edifice, christened the “South-La Block of Flats,” is a four-storey building comprising eight flats and a lower ground floor. Each flat is a four-bedroom apartment with a living room, kitchen, store-room, Visitor’s washroom and a porch.

The building currently houses eight (8) ministers of the church, six (6) of whom are ministers on secondment at the Head Office including the Pastors Benedict Eghan (Personal Assistant to the Chairman), Felix Okyere Anti (Administrative Secretary to the General Secretary), Dr. E. Arko Koranteng (General Manager, Pentecost Hospital), and two (2) other ministers in La Area.

Speaking at the dedication ceremony, Apostle Alexander Nana Yaw Kumi-Larbi emphasized the significant contribution of Tithes to the financial strength and infrastructural growth of the church. He said that The Church of Pentecost’s rise from obscurity to prominence is partly due to members’ faithfulness particularly in the area of tithing.

He noted that most infrastructural projects undertaken by the church are mainly financed through the Tithes received by members, saying that “If today, The Church of Pentecost is touted as a successful church, it is because of your faithfulness to the Lord in Tithing.”

The General Secretary, therefore, urged members to continue to tithe faithfully so that the church would have adequate resources to undertake various projects in line with Vision 2023.

Giving a brief history of the building project, the Projects, Estate and Development Manager of the COP Headquarters, Pastor James Orhin Agyin said that due to the phenomenal growth of the La Area in the past decade, it became necessary to ensure a decent accommodation for ministers of the newly-created Districts in the Area.

At the same time, the COP Headquarters also had a need of housing ministers serving at the Head Office at a location relatively closer to the Headquarters to aid them in effectively discharging their duties.

As a result, the COP Headquarters and La Area came together to undertake this joint housing project aimed at meeting each other’s needs.

The South-La Block of Flats building project was commenced on February 10, 2017 during the tenure of Apostle John Appiah-Appiah as the La Area Head. On August 8, 2018, the then Chairman of the church, Apostle Prof. Opoku Onyinah (now retired) laid the foundation stone for the project. The leadership of the La Area, La Area Estate Committee and the Projects, Estate and Development Department of the COP Headquarters supervised works at the various stages of construction to its successful completion.

Executed within a period of 24 months, the South-La Block of Flats was jointly financed by the Head Office and the La Area in an equal cost-sharing ratio.