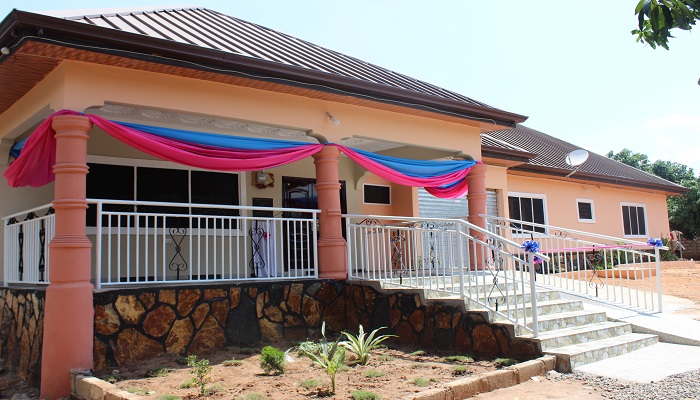 A 4-bedroom mission house for Okornya District in the Agormanya Area of The Church of Pentecost has been dedicated to the glory of God.

The edifice constructed at a total cost of GH¢170,786.00 comprises a living room, washroom, a dining hall, an office, a garage, a modern kitchen, a storeroom, among others. The building was dedicated by the Area Head, Apostle James Gabriel Quardson, assisted by the Pastorate in the Area.

The construction of the mission house began on December 14, 2014, after the sod-cutting ceremony was performed by the then Area Head, Apostle Jacob Narh Affum (now retired). The foundation stone was laid on October 9, 2016.

The project received massive financial support from the Headquarters, Area Office and certain individuals such as Elder Stephen Kofi Aidoo who donated roofing sheets, security doors, blocks and also paid for the cost of the P.O.P ceiling. Other members such as Elder Richard Amoni, Esther Koli and Joseph K. Tetteh also gave varied support to ensure the early completion of the building.

In a sermonette on the topic, “God is a God of Transfer” (Acts 8:1-7), Pastor Samuel Kwesi Bonney of Agormanya District who also doubles as the Area Estate Chairman stated: “God does not change but He is a God of change,” he said

“Indeed, God controls every happening and minute detail; even when a minister is posted to a new station, it is in God’s divine plan to bless His people and equip His church to overcome the world and possess the nations,” he expounded,” he added.

Pastor Bonney, therefore, urged the congregation to submit their will to God alone.

Drawing lessons from the life of Apostle Philip in Acts 6, he entreated Christians to maintain their integrity, depend solely on the Holy Spirit, be God-fearing, humble and serve God in Spirit and truth. He further admonished them to use their resources to serve the church and obey God’s command.

The occasion coincided with the farewell service of the District Minister, Pastor Alex Kyei-Yeboah, who has been transferred to Wassa Jukwa District in the Sefwi Bekwai Area.