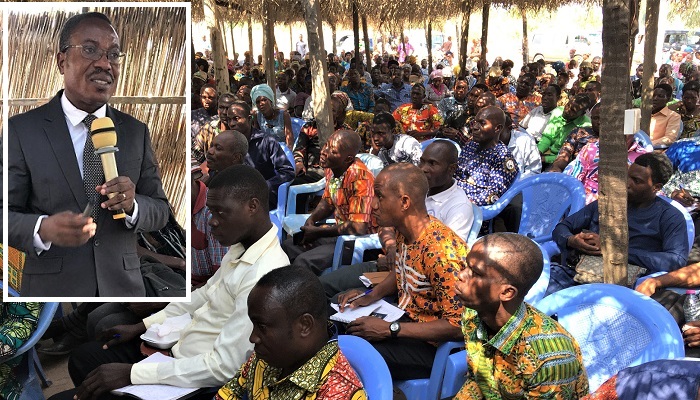 The Sogakofe Area of The Church of Pentecost has organised a day’s workshop on the effective implementation of the Vision 2023 document on Saturday, February 8, 2020, at the Bethel Prayer grounds, Agorkpo-Sogakofe.

Explaining the rationale behind the workshop, the Sogakope Area Head, Apostle Isaac Tetteh Juddah said a clarion call was issued at the just-ended Ministers and Wives’ Conference by the Chairman, Apostle Eric Nyamekye to Area Heads and Pastors to re-engage all officers on the 5-year strategic vision document of the church. This, he said, is to ensure that its content is well understood and appreciated by the officers, who are key to the effective implementation of the vision.

Speaking on the topic: “Systems and Change,” Apostle Tetteh Juddah defined systems as a group of human beings who have regular contact for the good of the group. He said although church members are from different families, they are bonded by the death and resurrection of Christ. This, he said, has made members of The Church of Pentecost one big family who are concerned about the welfare of each other.

According to him, systems maintain itself by roles, rules and rituals; however, they are all subject to change from time to time. “Doctrines do not change, but rituals, roles and rules do,” he said.

He further explained that any time God wanted to do a new thing in the Bible, he called a new leader. He said that Moses, for instance, was called into leadership by God to rescue the people of Israel from Egypt, while, Joshua, was mandated to take them to the Promised Land.

Apostle Tetteh Juddah, therefore, charged the officers to accept the change that new leaders bring and not to fight it. He said it is the responsibility of leaders to explain the vision they have received from God and to build structures for the smooth implementation of the vision.

“This is why some ministries and committees have been re-aligned while new ones like Ministry to Persons with Disabilities (MPWDs) and Home and Urban Missions (HUM) have been introduced to accommodate the Vision 2023,” he said.

The Sogakope Area Head indicated that every vision requires commitment, persistence, hard work and time to be realised. He, therefore, called on the church leaders to do everything possible on their part to ensure the successful implementation of the vision.

To achieve the desired results, he advised them to internalise the vision as individuals, picture the end-result and be encouraged by it.

He also urged them to constantly use the slogan “Possessing the Nations: I Am An Agent Of Transformation” to remind members about the desired results and also model the results for others to emulate.

“Let us also equip the members by training them because what gets trained gets done, measure progress, fund the vision and pray for the successful realisation of the vision,” he said. He also urged the church leaders to form prayer teams at the various levels of the church to pray towards the fulfilment of Vision 2023.

Touching on the topic: “Possessing the Nations: Equipping the Church to Transform Every Sphere of Society with Values and Principles of the Kingdom of God” during the second and last sessions of the workshop, Apostle Tetteh Juddah posited that there are numerous spheres that Christians need to possess for the Lord such as the family, business, health, governance and politics, among others.

He said that the overall goal of Vision 2023 is to build a church where members go to possess the nations by transforming every thought, worldview, and behaviour with values and principles and lifestyles of the Kingdom of God, thereby winning many for Christ.

He said that to achieve this, the local church ought to equip her members with the required resources, strengthen and re-align ministries and existing structures and institutions, and deploy members to go out and transform the society.

Apostle Tetteh Juddah also tasked the officers to ensure that their respective churches partner with the government and traditional authorities at the various levels to develop their communities.

He concluded by charging all ministers to ensure that their Speakers’ Plan reflects all aspects of Vision 2023.

In all, about 400 officers in the Area participated in the workshop.