Social Media, A Catalyst For Evangelism 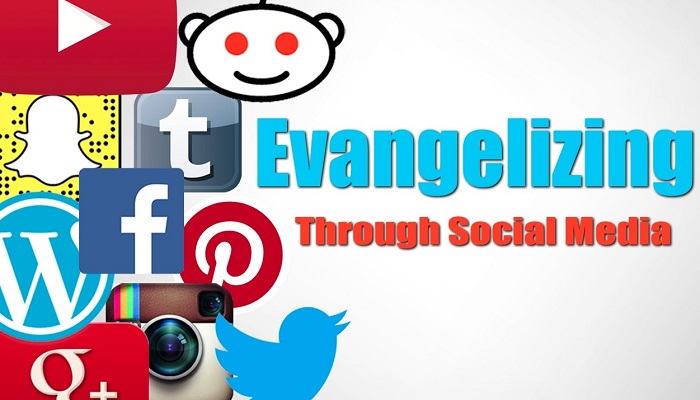 Social Media, A Catalyst For Evangelism

As relational beings, it is undoubtedly one of the main desires of humanity to be connected with others in the rest of the world by whatever means possible, regardless of one’s location, social status or religious beliefs. This is why Social Media has become a platform of choice for most people in the world today to satisfy this longing desire to stay connected.

The global persecution of Christians and the various plagues that continue to ravage the world we live in including the latest COVID-19 pandemic, affirms the view of many notable theological scholars and religious leaders that we are edging even more closer towards the final days of the earth’s history.

This, therefore, calls for an urgent response by Christians to prioritize the sacred duty of evangelism as the signs of Christ’s imminent arrival draws closer than ever. For this reason, concerted efforts should be targeted to reaching out to as many people as possible wherever they can be found.

Social Media, in this case, ticks the box perfectly as an avenue for reaching out to people in this time, because of its increasing rate of engagement. Social Media is no more seen as an entertainment platform for a lot of people, but as a place where they practically live their lives. All kinds of people, both adults and the young, rich and poor, educated and uneducated, now patronise the platform to express their opinions and to pursue other endeavours in business, education, health etc.

Statistics on Social Media activity in contemporary times show that usage has reached unprecedented levels. The Global Social Media Research Summary released by Smartinsights.com this year revealed that more than 4.5 billion people are said to be active internet users within every hour of the day. The year 2020 alone has recorded 321 million new internet users.

The findings also reveal that more than half (60%) of the total global population are active Social Media users!.
Social Media is gradually taking over as the number one form of communication. Newspapers which used to be the number one form of communication are gradually losing their relevance due to Social Media. When you look around, the average youth is an active user of one of the social media platforms or the other be it Facebook, twitter, Instagram, WhatsApp, WeChat, SnapChat, Skype, YouTube, 2go and so on.
Now, the world is shrinking into a global village through the Internet and the outreach strategies used by Apostle Paul of old can now be achieved through effective use of the worldwide web. To capitalize on the potential of the Internet in evangelism, Christians and churches must learn to use the power of these new Information and Communication Technologies to propagate the eternal gospel.

For centuries, various forms of technology have been employed by early believers to disseminate the Gospel of Christ. Even in the days of Paul the Apostle, his use of the ink and the scroll was seen as high-end technology at the time. This proves that Technology has always been with us, and has helped with the dissemination of the Gospel. In this dispensation, Social Media is the technology which the Lord has provided for Christians to aid our evangelistic efforts.

The Great Commission of Jesus Christ is that the gospel should be taken to the ends of the earth through various evangelistic activities (Matthew 28: 19 – 20, c.f. 24:14). Today, Social Media has emerged as a utility tool that can be tapped into, providing a method of communication that is fast, far-reaching and interactive. Social Media can, therefore, be used in many ways to spread information within and outside the church.

Social Media evangelism is a form of evangelism where the gospel is presented on the internet via Social Media platforms such as Facebook, Twitter, Instagram, WhatsApp, WeChat, SnapChat, Skype, YouTube, and so on. Activities on these platforms may include Christian apologetics, church services, Bible studies, Cell meetings, evangelical messages etc.

We have seen in recent years an emphasis on the friendship and networks (or community) approach to evangelism. In one of the earliest books on the internet and evangelism, Careaga states, “Electronic evangelism is friendship evangelism via the internet.” This was written way before the likes of Facebook and Twitter, which take the concept of friendship even further. We are now networked with thousands of people like never before. According to internet tool Tweet Reach, you can reach 34,877 people with one tweet (given that I have 3,086 followers). Compare this with the numbers one might reach through an average Sunday service in a church! This kind of reach in networking was unimaginable even just ten years ago.

Some Christians and churches who have identified Social Media as a ripe missions field have taken up the conscious practice of posting Christ-centered content and inspirational messages with the hope of reaching out to unbelievers on the digital space. Although the initiative of flooding the internet with Jesus-related content is applauded, Social Media evangelism would be more effective when a one-on-one approach is adopted. That is to say, just as personal evangelism is touted as the most effective means of winning souls for Christ, the same approach should be adopted when evangelising to people in the digital space. This is because people would find it easier and more comfortable to ask questions about faith in a private space online.

Building quality friendship is a very key aspect of evangelism since it breeds trust between the believer and the one being evangelized. This also enables the unbeliever to freely open up and share his or her opinions about Christianity for redress. Such personal conversations cannot be done publicly but privately. As in the case of Nicodemus, who visited Jesus in the night to seek clarifications on the Christian faith, we must engage unbelievers through private chats so that we can provide effective assistance to them.

Another issue of importance, when it comes to online evangelism is Follow up. There are a lot of things which seek the attention of people on the internet. It is worth noting that, the devil is also employing Social Media to lead souls astray. We must therefore not leave anything to chance, but continue to engage the people we evangelise to, especially those who have responded or seem to be responding to the gospel message. This means that the more we follow up on people we share the gospel to online, the higher our chances of winning them for Christ.

Social Media is ripe for a massive harvest of souls for Christ. This is because the online environment has made us more available and accessible than ever. People are looking for answers – answers that they are not likely to get on Google but from the believer; and if they get it from someone they know and trust, then all the better!

Social Media is a big pie which we must do everything possible as a Church to get a piece of and not wait for crumbs or leftovers. We must employ all tools available to us to ensure that we augment the Church’s efforts in realizing the vision of “Possessing the Nations.” Now is the time to invade the Social Media space with the unadulterated word of God. We already have the message; we only need the channels or medium to reach our target audiences. Social Media and the Internet in general is here is provide us a way to permeate the toughest parts and people of the world, wherever and whenever.

The Church must rise to the task. After all, she exists for nothing else but to draw people to Christ and to make them like Him. Let us, therefore, go out with creativity, boldness and these amazing new tools in our hands to share the best news in the world with more people than ever before. As Jesus did, let us pursue people with the Gospel wherever they are.

Between 2 to 7 BC, the Word became flesh and dwelt among men; in the 21st Century, the Word has become Digital and made its Dwelling among men on the Digital space.