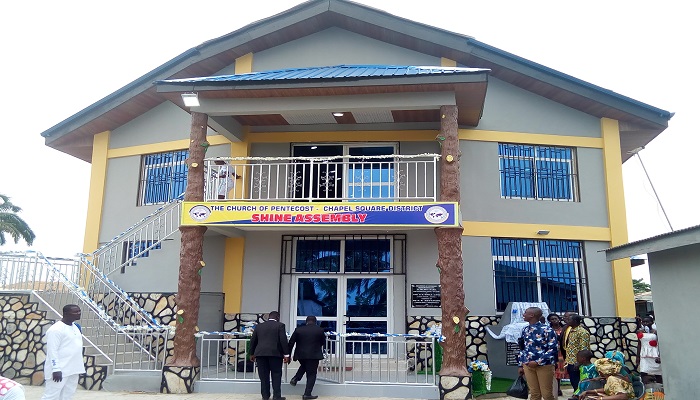 It was all joy when the newly constructed Shine Assembly church building in Chapel Square District of the Ashaiman Area of The Church of Pentecost was dedicated on Sunday, June 9, 2019.

The auditorium commonly called ‘Stamford Bridge Assembly’ due to its location on a bridge, was dedicated by the Ashaiman Area Head, Apostle Patrick Kingsley Enning, assisted by the District Minister, Pastor Samuel Asare Konadu, and the Pastorate in the Area. Also present was Prophet J. E. Ameyaw (Rtd), Apostle J. K. Ennin (Rtd), and the Regent of Ashaiman, Nii Annan Adzor, among others.

The Shine assembly was created out from the Ashaiman North district in 1999 by Pastor William Twumasi. The members numbering 48 initially fellowshipped in a classroom at the Shine Preparatory School with Elder Daniel Djagbley as the first presiding officer.

The plan to construct an ultra-modern church building was to address the fast growing membership of the assembly. A couple, Elder George and Deaconess Rebecca Sesi Avasi, offered portion of their private land to be used for the construction of the auditorium.

Apostle J. K. Ennin, the then Area Head, cut the sod to commence the construction of the building on November 2, 2002, and also laid the foundation stone on August 6, 2004.

The 300-seater auditorium with conference room, washrooms, and offices for accounts and records personnel, is estimated to have cost about GH¢527,500.00 funded through grants from Head Office, Area, and other sources.

“Jesus didn’t come as a king; He came as a helpless infant. Although He was perfectly God and perfectly human at the same time, He lived His life as a humble labourer,” he said.

Quoting from Philippians 2:3 and 1 Corinthians 1:26-27, Apostle Ennin encouraged members to be steadfast and look up to the Lord for their labour will not be in vain.