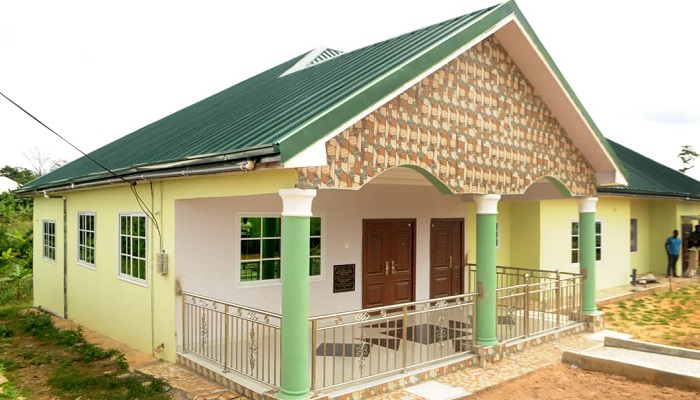 The Mission House of the Sefwi Asawinso Market Square District in the Sefwi Wiawso Area of The Church of Pentecost has been dedicated.

The 5-bedroom Mission House which was built at a total construction cost of GHȻ270,310.07 was dedicated by the Area Head, Apostle John Obeng Kesse on Friday, June 14, 2019. He was assisted by the Resident Minister, Pastor Michael Kwame Asare, and the Pastorate in the Area.

Exhorting the gathering on the topic: “Christians Are The Salt Of The Earth And The Light Of The World,” based on Matthew 5:13-16, the Sefwi Asafo District Minister, Pastor Ernest Acheampong, said that Christians are metaphorically likened to Salt and Light by Jesus Christ because He has given them the catalytic agent and power in these elements (Salt and Light) to transform every sphere of society.

“As Salt, Christians can affect their society with godly principles and Christ-like character to reverse the social canker and moral decadence in society,” he explained.

He further explained that, as Light, Christians can dispel the ills in their societies, and at the workplace, so that all corrupt acts will be discovered and perpetrators apprehended, to serve as a deterrent to others.

“Christians are not socially segregated from the world, however, they are different from all people and can influence and transform society,” he reiterated.

The Area Head, Apostle J. O. Kesse added that Jesus is the source of Light in every believer. Hence, He expects all believers to exhibit that same Light in this dark world even as they eschew evil.

He cautioned all Christians to illuminate every sphere of their lives with the glory of God because their bodies are the temple of God where the Holy Spirit dwells.

“Truthfulness and faithfulness should be the hallmark of every Christian,” he stressed.