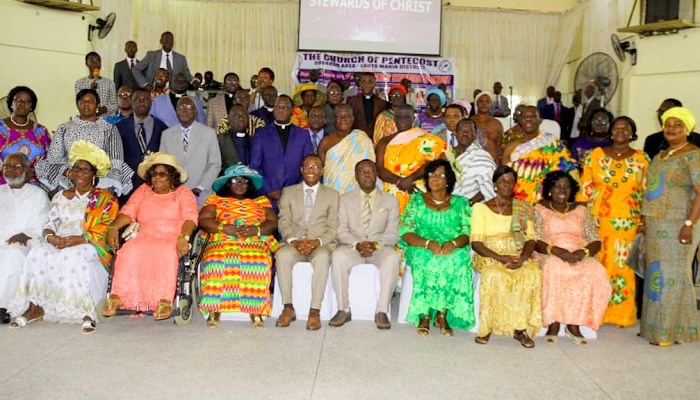 A retirement service was organised by the Santa Maria District in the Odorkor Area of The Church of Pentecost in honour of 13 officers for their meritorious services to the church.

The event, which took place on September 22, 2019, was graced by a host of dignitaries. Notable amongst them was the General Secretary of the church, Apostle Alexander Nana Yaw Kumi-Larbi, Apostle Patrick Aseyoro (Odorkor Area Head), Apostle S.K. Ansong (Rtd.) and Pastor John Ofei Badu (District Minister).

They were each given a citation, certificate of service and an undisclosed cash amount. The General Secretary, with assistance from Pastor Ofei Badu, also led the congregation to offer intercessory prayers for them

Speaking at the event, Apostle Kumi-Larbi advised the retired officer to continue to support “younger” officers in any way they can in order to move God’s church forward.

He advised them not to be saddened or troubled because their service as church officers has ended, rather they should sit back and joyfully look on as the young men and women they nurtured in the Lord take the baton of leadership and become great men and women of God who would continue to build on the solid foundation they have left behind.

The service was attended by family members of the retirees, as well as church members and well-wishers.