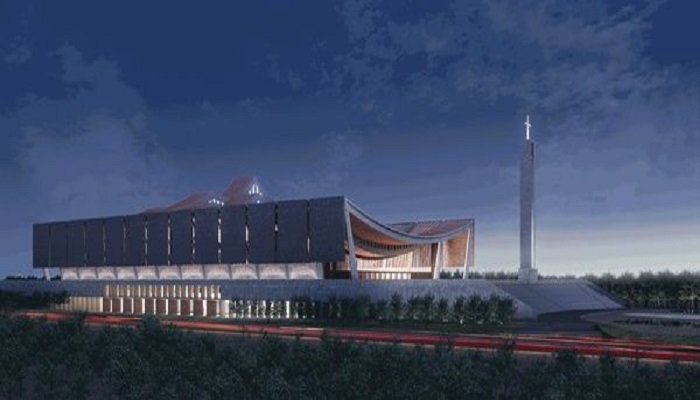 President Nana Akufo-Addo at a ceremony in Accra today [March 5, 2020] has laid the foundation stone at the site at Ridge, marking the start of the construction of the National Cathedral.

Addressing attendees of the ceremony at the construction site, President Akufo-Addo said he is determined to lead efforts aimed at ensuring the completion of the project in fulfillment of his pledge to God prior to the 2016 general elections.

It may be recalled that President Akufo-Addo during the launch of the National Cathedral Fundraising Campaign said he promised to build such an edifice should he win the 2016 elections.

“Rather, and again like Solomon on that occasion, the building of the National Cathedral is to serve as a gesture of thanksgiving to God for his blessings, favour, grace and mercies on our nation, and to give me an opportunity to redeem a pledge I made to Him before I became President,” he said back in 2018.

However, the Cathedral and its relevance or otherwise have sharply divided opinions in Ghana. A lawsuit challenging state involvement in the construction of the edifice was also thrown out by the Supreme Court.

Presenting the 2020 budget in Parliament Wednesday, November 13, 2019, the Finance Minister spoke of its relevance.

“Mr. Speaker, the interdenominational National Cathedral that will be located in the heart of the capital stands to help unify the Christian community as a place of worship and promote the national conversation on the role of faith in building Ghana. With the participation of various churches in the administration of the Cathedral, collective ownership of the project by the churches is envisioned” Ken Ofori Atta opined.

President Akufo-Addo cutting sod finally for the construction of the edifice on Thursday said: “As I indicated on 6th March 2017, upon completion, the National Cathedral is certainly going to be one of the iconic structures of the African Continent. Since gaining our freedom from the colonial power sixty-three years ago on the 6th of March 1957, Ghana has so far been speared civil war, famine, and epidemics.”

“We are certainly no better than the other nations in our neighborhood who have been confronted with these challenges. I believe it is by the grace of God that we have been preserved and sustained. The construction of the Cathedral will be an act of thanksgiving to the Almighty for His Blessings, Grace, Favour, and Mercies on our nation. Secondly, seventy-one percent of the Ghanaian people adhere to the Christian religion grouped under the various persuasions of the Christian Faith. The interdenominational National Cathedral will help unify the Christian community and thereby help promote national unity and social coercion” President Akufo-Addo added.

The Cathedral will have chapels and a baptistery, a music school, an art gallery, and a Bible museum.

The design for the Cathedral was unveiled by President Nana Akufo-Addo, in March 2018.

Meanwhile, actual work on the project is expected to begin on Friday, March 6, 2020.