Prayer Is The Oxygen Of The Christian – Apostle Kumi-Larbi 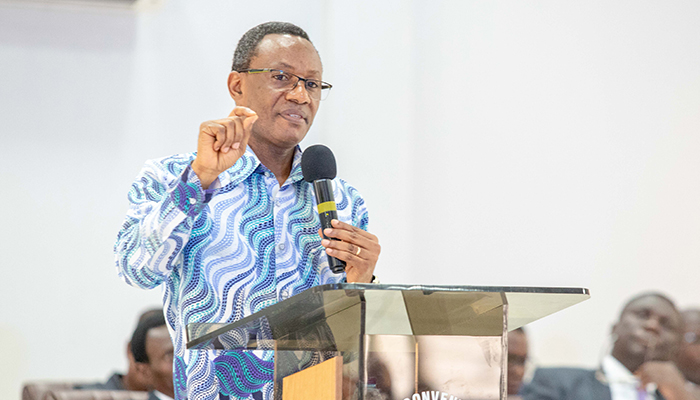 Prayer Is The Oxygen Of The Christian – Apostle Kumi-Larbi

The General Secretary of The Church of Pentecost, Apostle Alexander Nana Yaw Kumi-Larbi, has said that just as oxygen sustains the physical life of human beings, prayer sustains the spiritual life of every Christian.

Apostle Kumi-Larbi said this on Wednesday, June 5, 2019, during the opening session of the Prayer Centre Leaders’ Seminar at the Pentecost Convention Centre (PCC), Gomoa Fetteh, near Kasoa in the Central Region.

Speaking on the topic: The Role Of Prayer In The Building Of The Church” based on Mathew 6:5-17, among several other Bible texts, Apostle Kumi-Larbi explained that prayer plays an instrumental role in the building of the Church of God and is therefore very key to realizing the Church’s vision to possess the nations.

He noted that although prayer is very significant in the Church’s worship life, it is equally important for believers to have a godly approach towards prayer in order to make it effective.

Quoting Matthew 6:5, the General Secretary cautioned Christians to eschew hypocrisy in prayer. He said that although Jesus does not criticize public prayer, He condemns pretentious or ostentatious prayer that attracts attention.

He noted that Jesus encourages Christians to enter their innermost when they pray and not to seek the attention of onlookers.

On the content of prayer, Apostle Kumi-Larbi advised Christians to avoid vain babbling of words, which he describes as “flesh-inspired tongues,” but to be specific and focused in prayer since the Heavenly Father already knows their needs even before they ask of Him.

“We need to focus on the Lord in prayer. We do not have to just repeat words; this makes prayer ineffective. Effective fervent prayer has specific prayer points that are grounded on the word of God with a heart full of thanksgiving (Philippians 4:6-7).

“For many of us, we just babble in tongues while our eyes are even opened looking around; that is carnal prayers; that amounts to ‘gymnastics’ and does not demonstrate faith or inspired faith because faith is grounded on God’s Word (Romans 1:17),” he said.

Apostle Alexander Nana Yaw Kumi-Larbi, therefore, advised Christians to emulate Apostle Paul, who did not only pray in the Spirit (in tongues) but also with words of understanding (1 Corinthians 14:15).

The Prayer Centre Leaders seminar, also known as the National Prayer Conference, is being attended by leaders of all approved Prayer Centres of the Church across the nation.