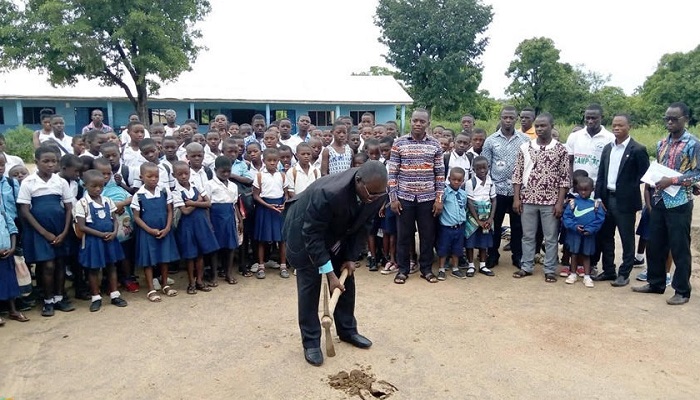 The Sawla Area Head of The Church of Pentecost, Apostle William Ohemeng-Kwakye, on Tuesday, October 8, 2019, cut the sod for the commencement of a 3-unit classroom block building project at the Pentecost Preparatory School, Sawla (PPS-Sawla).

This new classroom block would cater for the Junior High School (JHS) pupils (from JHS 1 to 3) particularly for pupils of JHS 2 who are temporarily accommodated in a church auditorium due to inadequate classrooms.

Speaking at the ceremony, Apostle William Ohemeng-Kwakye said that, as part of the 5-year strategic vision of the church dubbed “Vision 2023: Possessing the Nations”, it is expected that schools owned by The Church of Pentecost would focus on transforming society by imbibing good moral values as well as Kingdom values and principles in both pupils and teaching staff.

He, therefore, entreated authorities to see to it that pupils are given the right training in the school. He also urged the teachers to be devoted to their work so as to increase enrollment in the school.

Apostle Ohemeng-Kwakye also stated that the first batch of final-year pupils of the school who would sit for the Basic Education Certificate Examination (BECE) in 2021 should be given adequate preparation so that they would pass out with flying colours and project the image of the school in the municipality.

The Sawla Area Head also announced that a new mechanized borehole would be constructed for the school to provide potable water for pupils and teachers.

Present at the ceremony were the Sawla Area pastorate, the Area Deacon, the Area PENTSOS Committee Chairman as well as staff and pupils of the school.