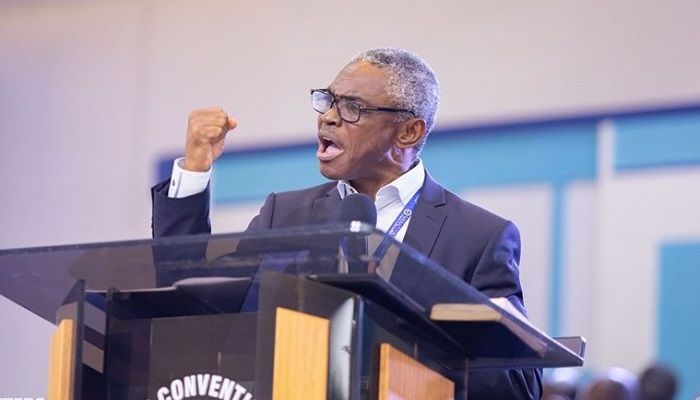 The Takoradi Area Head of The Church of Pentecost, who doubles as an Executive Council Member of the church, Apostle Joseph Assabil, has called on all church leaders to cultivate the spirit of prayer in their quest to possess the nations for Christ.

Apostle Assabil revealed that prayer is the heart of every vibrant and fruitful ministry. “Therefore, if the church can go into the world and subdue the nations by influencing people with the values and principles of the Kingdom of God, fervent and effectual prayer must be invoked,” he stressed.

Apostle Assabil said this on Friday, January 24, 2020, at the 7th edition of the Ministers and Wives’ conference which is currently underway at the Pentecost Convention Centre (PCC), Gomoa Fetteh near Kasoa.

Speaking on the theme, “Possessing the Nations Through Prayer,” based on Isaiah 62:6-7, Ezekiel 22:29-30 and James 5:16-18, the Takoradi Area Head indicated that the fall of man in the garden of Eden caused man to lose the legal right and dominion over the kingdoms of the world.

He added that Christ’s sacrifice on Calvary’s cross turned the tables in favour of mankind. “Christ now has all power and authority and has given that authority to the Church to possess the nations for Him,” he reiterated.

He, however, posited that although Christ has subdued the world and won the victory for the Church, the Church has to venture into the world with prayer for the victory to be fully achieved.

“Just as the Israelites were given the promise of a land flowing with milk and honey, yet, they had to move from Egypt through red sea, the wilderness amidst so many battles until they reached the Promised Land, in the same vein, we as the New Testament Church must possess the nations through fervent and effectual prayer,” he indicated.

In his presentation, Apostle Assabil elaborated on four primary significance of prayer that must be utilized by every believer. According to him, prayer takes away the weaknesses of the Christian. Drawing lessons from the Israelites battle with the Amalekites, Apostle Assabil indicated that while Moses’ hand was held up, the Israelites were winning the battle but when he became weak, the Amalekites gained the advantage over the Israelites. He, therefore, posited that “Prayer is the link between our impotence and God’s omnipotence.”

He further expounded that “prayer wins souls and not complaining.” The Takoradi Area Head explained that sinners cannot live holy lives; therefore, Christians, particularly Church leaders, ought not to criticize sinners when they sin, however, they ought to raise prayer altars to win such souls.

“We should not criticize sinners when they sin because it is their nature, instead, let us pray and intercede for them in our closets then God will hear us and deliver them from their sinful lives,” he advised.

Apostle Assabil noted that prayer also secures won souls. He revealed that prayer not only wins souls but also secures them in Christ. Reading from Acts 20:29, he indicated that “it was Apostle Paul’s prayer that secured the Ephesian Church from being swayed from the faith. Therefore, before his departure, he warned the Ephesian Elders to maintain the altar of prayer else savage wolves will come in and scatter the sheep.”

He concluded by saying that “prayer reminds us of our role as Christian soldiers.” Apostle Assabil explained that every Christian is a soldier on a fierce battlefield where the war is always raging. He added that the war is, however, fought in the spiritual realm and the weapon of this warfare is prayer.

He, therefore, admonished Church leaders to delve deep into prayer and rekindle every dimming prayer altar so that they can stand boldly as soldiers of Christ as they wage war against the forces of darkness to possess the nations for Christ.