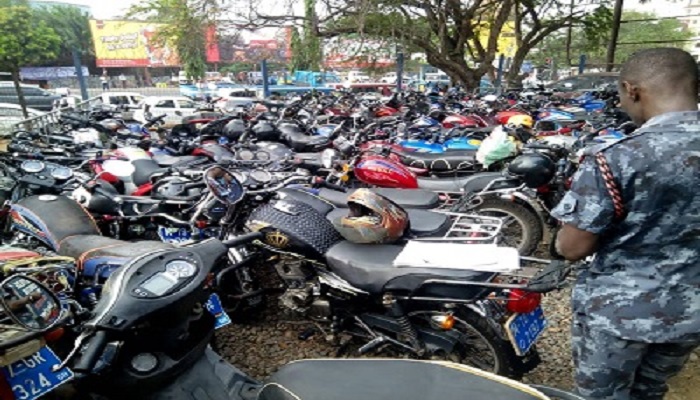 At least 1,000 motorcycles have been impounded by the police in a special operation in the Accra Metropolis.

The exercise, which was conducted between February 20 and March 3, was to clamp down on criminal activities and also ensure that the riders abide by the road safety regulations.

The Accra Regional Police Commander, Deputy Commissioner of Police (DCOP) Fredrick Adu Anim disclosed these to the Ghanaian Times in Accra yesterday stating that the riders were being processed for the motor courts.

He said the exercise follows series of reports from the public about the use of motorcycles by some criminals in committing street robberies and abuse of the road traffic regulations.

DCOP Anim said some of the criminals use the motor cycles to rob their victims of their bags, cars and motorcycles.

The Commander said in February this year, 25 street robberies with the use of cycles by criminals were recorded by the command.

He said some of the riders were also arrested for gross disregard for the road traffic laws such as riding unlicenced motor cycles, riding through red lights and riding with fake licence, among others.

DCOP Anim said the exercise was ongoing to ensure that the roads were safe for both pedestrians and commuters.

The Commander cautioned criminals to desist from such negative acts or they would be dealt with.

“We are serving a word of caution to the criminals to desist from their negative acts or the police will carry the war to them,” he stressed.

He urged riders to get proper documentation on their motorcycles and abide by the road safety regulations.

DCOP Anim appealed to the public to make their safety a priority at all times and volunteer reliable information on criminal activities to the police for the necessary action.

He said business men and institutions who go to the banks for huge sums of money should go to the police for assistance.

“Avoid walking alone at night and be cautious of two people on motor cycle at obscene places,” he added.