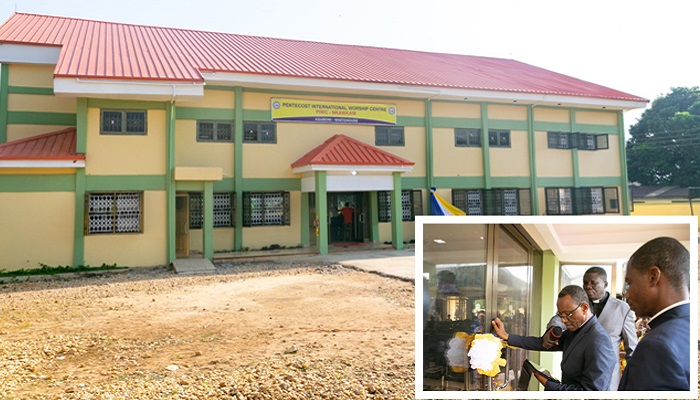 It was a great day for members of the Pentecost International Worship Centre (PIWC-Nkawkaw) as they witnessed the dedication of their ultra-modern church edifice on Sunday, December 8, 2019.

The building was dedicated by the General Secretary of The Church of Pentecost, Apostle Alexander Nana Yaw Kumi-Larbi, at the cost of GH¢639,986.40. He was assisted by Prophet Robert Kobina Dentu (Nkawkaw Area Head) and Pastor Bright Nyamedor (Resident Minister).

The construction of the auditorium started in 2008 during the time of the then Area Head, Evangelist Emmanuel Asante. Four years later, the foundation stone for the building was laid by Apostle Anthony K. Ahalivor now retired, assisted by Pastor J. B. Akomeah on August 19, 2012.

Speaking at the service on the topic, “Restoring the Lost Glory,” Apostle Kumi-Larbi said that to restore is to return to a former condition, place or position.

With Romans 3:23, 6:23, 8:28-30 as his reference scripture, he said whenever a believer sins, the glory of God departs from him. He added that anytime the glory is lost, man has nothing in relation to God, with reference to Adam in the Garden of Eden.

“Death brings an end to the chance of accepting Jesus Christ, for death came as a result of sin. If man’s position and state does not confirm God’s plan, man has fallen short from the glory of God,” he pointed out.

He encouraged the members to rediscover their position since God is ever ready to restore any lost glory.

He revealed that the lost glory is only found in Jesus Christ and He is ready to restore any lost glory. He asserted that when one finds Jesus Christ he/she will depart from darkness to light and from death to life.

He urged them to allow Jesus into their life since Jesus is the only one mandated to bring restoration.

He concluded by saying, “If you have Jesus in your life, you do not need anybody to interpret what God wants to tell you, for he speaks and you understand.”