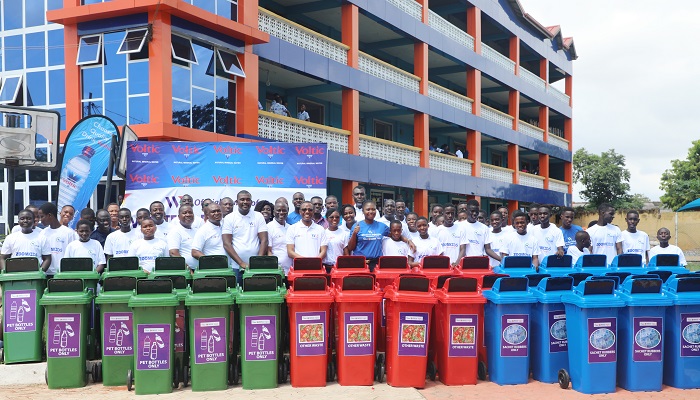 The Pentecost Social Services (PENTSOS), the social services wing of The Church of Pentecost, in partnership with Zoomlion Ghana Limited and Voltic Ghana Limited, has launched a school sanitation improvement project dubbed ‘Waste for Education’ (W4E).

The W4E project, aimed at accelerating the business of collecting and recycling of plastic waste to improve sanitation and wealth in Ghana, was launch by the General Secretary of The Church of Pentecost, Apostle Alexander Nana Yaw Kumi-Larbi, at a ceremony held at the Datus School Complex at Bubuashie, Accra on Tuesday, November 5, 2019.

It attracted pupils and teachers from the Pentecost schools in Accra, officials of Zoomlion Ghana Limited, Voltic Ghana Limited, ministers of the Church from the Kaneshie Area led by the Area Head, Apostle Mike Etrue and other stakeholders in education and sanitation sectors.

Speaking at the event, Apostle Kumi-Larbi noted that the overarching goal of the project is to contribute to the improved well-being of pupils in Pentecost Schools through good environmental sanitation.

According to the General Secretary, the project seeks among others, to establish a culture of environmental cleanliness among the pupils through behavioural change approaches, establish plastic waste storage and collection bays in schools, institute a reward system for the collection of plastic by pupils in order for private sector recycling companies to pick up for re-use and recycling.

The project, he indicated, will go a long way to inculcate a culture of environmental cleanliness among the pupils.

This effort at the school level, he said, will be complemented with health and hygiene education programmes and activities. “It is expected that this habit inculcated in the schools with remain with the children beyond the walls of the schools and consequently impact our communities and nation. We hope this initiative will be successful and eventually be replicated in all schools in Ghana,” he stressed.

The General Secretary assured that the project would be packaged for the adult members at the various levels of the church in order to bring the whole church populace onboard to effectively deal with plastic waste in Ghana.

The Director of PENTSOS, Elder Richard Amaning, explained that the project will be implemented in selected Pentecost Preparatory Schools in Accra and Kumasi over a 36-month period with funding support from the project partners – The Church of Pentecost, Voltic and Zoomlion Ghana.

With support from its partners, Elder Amaning noted that annual cleaner cities conferences would be organised to create a platform at the national level for dialogue on general sanitation involving the pupils.

He stated that the income generated by the schools based on payment received from the recycling companies will be channelled to procure text and exercise books for the pupils and in some instances subsidize the school fees of the pupils involved.

The National Programme Officer of Zoomlion Foundation, Mr. Thomas Narh Korley, said that W4E is part of efforts to eliminate plastic litter from Ghanaian schools. This, he noted, falls in line with Zoomlion’s vision to promote clean and green communities in Ghana.

“The Church of Pentecost is encouraging its schools to learn to manage their plastic waste well. Zoomlion Foundation will provide dustbins to the schools and use awareness education to encourage separation of waste,” he added.

Led by the Zoomlion Foundation, he said, over 500 schools have been given assistance to properly collect and segregate waste while thousands of waste bins have been donated to the schools. “The Zoomkids Club approach is used to promote peer-to-peer education in the schools and to generate the needed effects,” he added.

The Public Affairs & Communication Manager of Voltic (GH) Ltd, Joyce Ahiadorme, on her part, stated her outfit’s intention to work together with other stakeholders to set up collection points in communities in line with their ambition of collecting and recycling 100 per cent of their packaging by 2030.

She said that Voltic is engaging various stakeholders to create an ecosystem that drives collective sustainable action towards managing post-consumer plastics.

“Voltic believe that sustainable environmental management is a shared responsibility of the industry, policymakers, waste pickers and consumers alike.

“As we act responsibly to manage our post-consumer waste, we will like to see all consumers becoming environmentally conscious. An empty Voltic bottle and any other plastic for that matter do not belong in the gutter, streets or in the seas, it belongs in a bin where it can be recycled,” she stated.