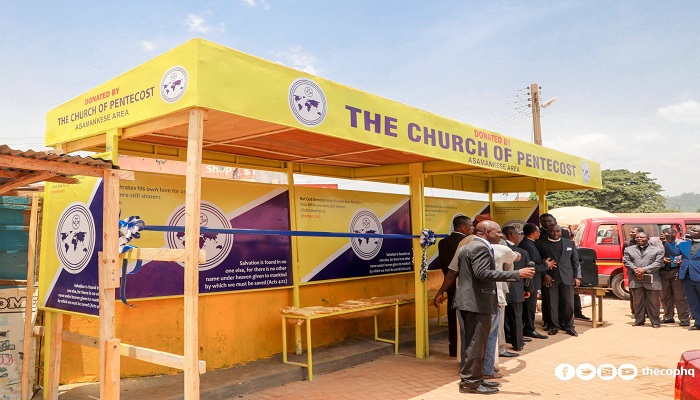 As part of the efforts to possess the nations by transforming every sphere of society with values and principles of the Kingdom of God, the Asamankese Area of The Church of Pentecost has constructed a bus stop at the Asamankese Main Lorry Park.

The General Secretary of the Church, Apostle Alexander Nana Yaw Kumi-Larbi, on March 13, 2019, dedicated the facility and handed it over to the officials of the Ghana Private Road Transport Union (GPRTU).

The facility, which has come as a sigh of relief to commuters in the municipality, is the only one at the station providing shelter for the travelling public.

The commissioning of the bus stop which coincided with the dedication of the Area Office was attended by the Chief of Asamankese, Osabarima Adu Darko III, officials of GPRTU-Asamankese Branch, members and ministers of the Church including the Asamankese Area Head, Pastor Isaac Ekow Eshun.

In a short address, the General Secretary stated that the construction of the facility is a realisation of the Church’s agenda of transforming society by partnering government and state institutions to provide key interventions to facilitate the development of the nation.

According to him, the Church’s five-year strategic vision of possessing the nations is geared towards equipping its teeming members to make an impact in society by living out and standing for the values and principles of the Kingdom of God in every sphere of life.

He also added that the Church has also taken up environmental cleanliness as part of the vision to rid the nation of filth. He entreated Ghanaians to keep their surroundings clean and eschew littering the environment.

Apostle Kumi-Larbi, who personally pledged to donate two waste bins to be placed at the bus stop in order to keep the station clean, called on the officials of the GPRTU to adopt a maintenance culture to always keep the facility in good shape.

The Asamankese-Oda-Kade-Akroso Station Branch Vice Chairman of the GPRTU, Mr. Paul Nyarko, who received the facility on behalf of the Union, commended the Church for coming to the rescue of the Union.

He was full of appreciation to the Church for the gesture and promised to take good care of it in order to serve its intended purpose.

The bus stop has been painted in the Church’s colours. It has also got some salvation messages which would automatically speak to the travelling public about Jesus Christ.