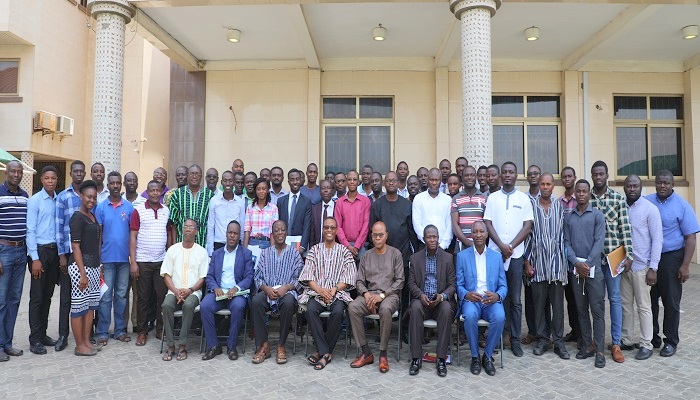 As part of the effort to possess the nations in various spheres of work, members of The Church of Pentecost (COP) who belong to the built environment sector have come together to possess the construction industry in Ghana.

Known as the Pentecost Built Environment Guild (PBEG), the group which includes engineers, architects, building technologists, planners, surveyors, and others whose professions are related to land use and development, met for the first time on Wednesday, March 6, 2019.

The General Secretary of The Church of Pentecost, Apostle Alexander Nana Yaw Kumi-Larbi, a Civil Engineer by profession, who chaired the Southern Sector meeting, said the meeting was called to bring all professionals in the built environment under one umbrella to brainstorm and chart the way forward for the sector, where members can network, sharpen their skills, encourage and motivate one another to go out to the field to affect society positively.

He explained that the move to establish the guild is in line with the objectives of the new 5-year strategic vision of the Church dubbed Vision 2023. He said as part of the agenda to possessing the nations, the Church wants to harness all human capital in its fold to instill Christ-like values and character in them and deploy them into the world to help transform the nations in their field of work.

Speaking on the theme of the meeting, “Towards the Possessing the Nations Agenda: My Role as a Developer” and quoting from Exodus 35:30-35 and Luke 14:28-30, the General Secretary indicated that God has endowed the Church with the requisite resources to be able to affect their areas of operation.

“God has placed us at vantage places where we can make an impact. He has really endowed us with grace and opportunities that we can take advantage of to develop the nation,” he stressed.

Reading further from Romans 1:29-32 and Jeremiah 1:10, the General Secretary noted that evil now abounds as people invent ways of doing evil in order to have what they want. He, however, charged members of the guild to assert their rightful roles in society as salt and light in their professions by eschewing corrupt practices such as shoddy works, over-invoicing, poor supervision, building in waterways, not adhering to procurement procedures, among others, to protect the public purse.

He called on them to identify their colleague church members in other sectors and do business with them, saying, “It’s about time we begin to buy COP, eat COP, cloth COP, support and patronise COP.”

The General Secretary led the group to discuss aspects of the Vision 2023 on Projects and Infrastructural Development.

The National Chairman of the Estate Committee of The Church of Pentecost, Apostle Anthony K. Ahalivor, on his part, was hopeful that the establishment of the guild will help correct some of the wrongs in the construction industry in the country.

He stated: “The nation is looking up to us and we cannot afford to fail this nation.”

A seven-member team led by Elder Alfred Langdon of PIWC-Kokomlemle was constituted to coordinate the activities of the guild in the Southern Sector.

All the professional guilds, including the PBEG, would be launched by the Chairman of the Church, Apostle Eric Nyamekye, very soon at the PCC.

Present at the meeting was Pastor James Orhin Agyin (Projects, Development and Estate Manager at the Head Office) and some members of the National Estate Committee.