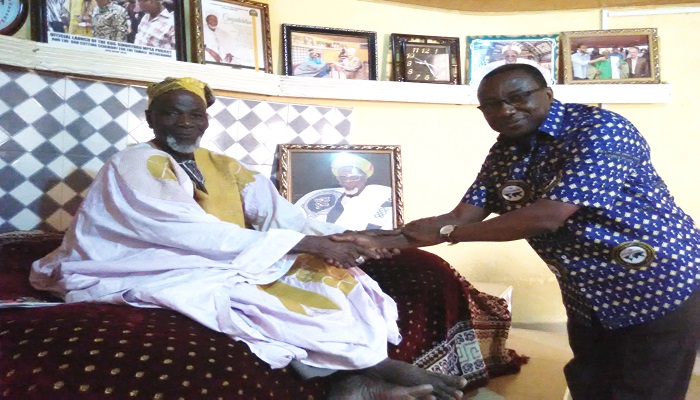 As part of his weeklong working visit to Walewale, Yendi and Tamale Areas of The Church of Pentecost from May 13-19, 2019, the Director of the Pentecost Men’s Ministry (PEMEM), Apostle Emmanuel Ofei Ankra-Badu, visited the overlord of Dagbon, Yaa-Naa Abubakari Mahama II at Yendi.

The PEMEM Director congratulated Yaa-Naa Abubakari Mahama on his successful and colourful coronation. Apostle Ankra-Badu encouraged him to sustain the peace that the people of Dagbon are now enjoying to promote development in the area. The team then prayed for the Yaa-Naa for divine protection and long life.

Showing his appreciation for the visit, Yaa-Naa Abubakari Mahama thanked the PEMEM Director and his team for the honour done him by visiting his palace.

While in Yendi, the PEMEM Director and his team of facilitators from PEMEM Secretariat visited some old men in the Area who pioneered The Church of Pentecost and the Men’s Ministry in the Area. One of them is Mr Nimako Krah whose father was one of the founding members of The Church of Pentecost in Yendi, during the early 1970s. He congratulated them on their selfless contribution to the growth of the Church and the ministry.

Interacting with the PEMEM Director in his family home, Mr Nimako revealed that his father was very instrumental in the ministry of Apostle Prof. Opoku Onyinah when the latter was transferred from Tamale to Yendi to start the Church there. He also disclosed that he (Mr Krah) was very instrumental during the time of Apostle Dr M. K. Ntumy when the former Chairman was a district Pastor in Yendi and even travelled with him to Krachi to open new churches there.