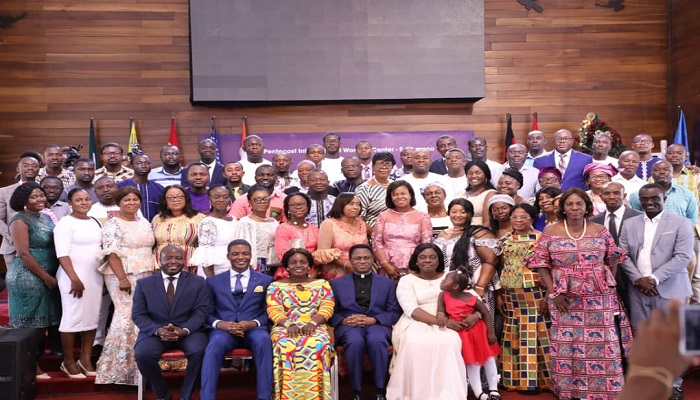 The Chairman of The Church of Pentecost, Apostle Eric Nyamekye, has urged Christians to pay serious attention to the celebration of Christmas.

Apostle Nyamekye said this when he and his family fellowshipped with Pentecost International Worship Centre (PIWC) – Sakumono to climax the 2019 Christmas convention which was on the theme, “A saviour has been born to you, He is the Messiah, the Lord,” (Luke 2:11).

Speaking on the topic, “The virgin birth of the Lord Jesus Christ,” Apostle Nyamekye stated that, some people hate Christmas celebration, while others feel it is a burden to celebrate it because it has been commercialised. He added that others also argue about the date for Christmas celebrations.

He explained that there are those who want to celebrate Christmas at home with their families and would not want to engage in any church activities. “Be careful of the argument about Christmas, our Lord Jesus Christ died for mankind and not for families and He is the most celebrated person on earth,” he cautioned.

Apostle Nyamekye indicated that the wonders that preceded the coming of Jesus Christ cannot be compared to any other story ever told in the world, saying, “It will never be depleted. His birth drew both the Jews and gentiles together to visit Him; the Shepherds were Jews while the wise men were Gentiles.”

Apostle Nyamekye indicated that it was the birth of Jesus which brought about the pregnancy of Elizabeth, who was earlier labelled as barren, while Simeon’s death was suspended until he had seen the salvation of the world.

Apostle Nyamekye read from Luke 2:8-20, Mathew 1: 1-23, Mark 14:61-65, 1 Timothy 3:14-16 among others, and explained the essence of the virgin birth by saying that Christ was born for the Church. He explained that the Church is the pillar and foundation of the truth and if Christians hold on to the truth, people will come for the truth. “It is the Church that holds the truth, the world does not hold the truth but the Church does; it is solid,” he added.

According to Apostle Nyamekye, the mystery of godliness as recorded in 1 Timothy 3: 14-16, was when God became man and the fact that God was able to pick a person from an unholy world, and preserved the holiness of the baby Jesus, the Savour of the world, until He was born.”

“I believe Joseph was put under divine order not to touch his wife till the baby was born,” Apostle Nyamekye said adding, “This was to ensure that there was no dispute about who Jesus father was.

Stating the importance of Jesus’ virgin birth, Apostle Nyamekye said that all have sinned and come short of the glory of God, hence the human race needed a saviour (Romans 5:12) in the person of Jesus Christ. The saviour needed to arrive in the world by a woman through the Holy Spirit and not through the consummation of marriage by a man and a woman (Galatians 4:4, Hebrews 10:5).

Apostle Nyamkye used the occasion to advised Christians to be more prayerful in the ensuing year and desist from consulting so-called men of God for directions. He prayed for the entire congregation and pronounced blessings upon them.

The Resident Minister, Pastor Anthony Owusu Sekyere Kwarteng, was grateful to the Chairman for the visit, saying it was a great honour for the church to receive the ministration of the Chairman.